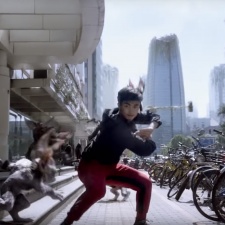 Apple is targeting mobile gamers for its iPhone X device with a brand new advert flaunting the smartphone's A11 Bionoic chip.

The commercial, titled “Unleash”, showcases the iPhone X running Super Evil Megacorp's MOBA Vainglory and features a player seamlessly swapping in and out of social tools and apps during gameplay.

While intended as a showcase of the device’s gaming potential, the ad also conveniently works as a promotion for Vainglory. Cementing the partnership, Apple and Super Evil Megacorp will be hosting an event next month at a San Francisco Apple Store.

To promote the campaign, Vainglory players will be able to equip a cosmetic to make one of the game’s heroes, Reza, appear as star of the commercial, d4v11d.

Super Evil Megacorp has also gone into detail as to how its games have benefitted from the A11 chip. A blog post explains how the increased processing power has allowed the studio to give Vainglory fog-of-war calculations in a mobile MOBA.

Super Evil Megacorp has ambitions beyond technology for the title. Vainglory will be appearing at this year's World Electronic Sports Games alongside mainstays like Counter-Strike: Global Offensive and DOTA 2.