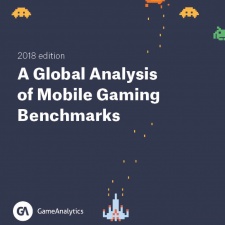 That’s according to GameAnalytics’ second annual Mobile Gaming Benchmarks report, which named Racing, Action and Arcade games as those with the highest average revenue per paying user.

The bulk of the report looks at player retention, which doesn’t paint an optimistic picture for developers. It suggested that if 35 per cent of new players returned after day one, this would show a title is doing well. Only 15 per cent of games achieve this, however.

Beyond that, an average of just 1.5 per cent of players are still engaged after 28 days.

By day 28, 94 per cent of players will have abandoned a game. Puzzle, Word, Board, Trivia and Casino games showed the best chance of bucking this trend and retaining players over long periods.

Across the board, average session length has dropped from six to five minutes. Top performers manage to hit double this figure, while those on the lower-end often struggle to hit three minutes.

I want it all

The report paints an overall mobile space dominated by very few high-performers, with the rest fighting over scraps when it comes to revenue and attention.

It claims that the top performing games have eight to ten-times higher ARPPU than the rest.

“The gaming market is a winner-takes-all space, with most titles barely earning anything,” said GameAnalytics CEO Ioana Hreninciuc.

“Working with these developers on a day to day basis, it's clear that studios who take time to monitor their metrics, run experiments, and use data in their campaigns take the lion's share of revenue.

We see over and over again what a big difference it makes when developers marry their passion with a numbers-driven approach, and we're here to help small teams who want to get started on this journey.”