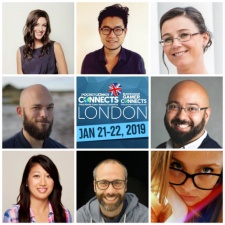 Europe’s biggest B2B expo and conference for the mobile games industry returns to the UK to kickstart a year of international events with Pocket Gamer Connects London on January 21st to 22nd.

We’ve already talked about the likes of Supercell, Jam City, SYBO, Riot Games and Nerial joining the first wave of speakers for Pocket Gamer Connects London 2019 - see here for more on that - but we promised to reveal more names… and we like to keep our promises!

The audience will be treated to takeaways from the development of Rovio’s new game.

Prototyping, data and the changing face of F2P

We’re super excited that Rovio Entertainment will be speaking at the event, with executive producer Sophie Vo explaining how to incorporate user research during the prototyping phase.

She’ll talk about the maturing market for mobile games and why that means a more granular approach to free-to-play game development. The audience will be treated to takeaways from the development of Rovio’s new game, including how user research led the team to pivot design early on and low-cost methods any developer can use.

It’s a theme that continues with Lucky Kat Studios CEO, Herdjie Zhou, as he points out why indies should be more data-driven.

And sticking with F2P game design, Lissa Capeleto, senior UI designer at Space Ape Games will share the pain and pleasure of F2P UI design. Looking at balancing what's good for the product - using KPIs such as retention and conversion - and what's good for the players, her talk will include practical tips for dealing with the highs and lows of this challenging sector.

What you can do to prevent your game getting cloned, including IP rights such as trademarks, trade secrets, and patents.

Any indie studios turning to branded commissions to bankroll passion projects should make a point of hearing Funday Factory’s Emil Kjaehr as he explains how to build branded games without getting burnt.

From landing the gig to dealing with multiple stakeholders and managing expectations, this talk will cover practical steps on how to tweak your internal development process, as well as practical tips and tricks learned from years of developing branded games to some of the worlds largest IPs and brands. It will also look at how to ensure that you can build games with major stakeholders without burning yourself, the IP or the team.

Canada’s Karman Interactive has worked on branded content for some of the biggest brands in the world. Ram Kanda, head of design will be on-hand to share their experience of creating Bendy, covering branding, UI, UX, monetisation, regulation/privacy, and marketing for a younger audience.

Influencers, employers, the law - and you!

It can be a legal minefield out there, but Beata Sobkow from London-based law firm Harbottle & Lewis is on-hand to guide you through it with three things that games developers need to know to safeguard their games.

As well as covering GDPR and copyright, she’ll also walk you through the legal implications of creating games on company time or equipment, working with friends and what you can do to prevent your game getting cloned, including IP rights such as trademarks, trade secrets, and patents.

Derk de Geus, CEO at Paladin Studios, brings us into the new year after 2018’s infamy as the ‘Year of the Bad Employer’. This talk will give you practical tips to deal with the most common pitfalls, such as excessive crunch, gender pay gaps, selection bias and widely ignored core values.

We’ll also be joined by Olesja Marjalaakso, CEO at Polka Dot Studio, who will talk about the scary prospect of betting the studio's future on one influencer.

How to build a mobile game with help from your community..

The democracy of live ops

EVE Online famously has one of the most passionate and committed player bases in gaming. CCP game director Sam Barton will explain how to build a mobile game with help from your community.

Kolibri Games CEO, Daniel Stammler, will look at a product development process driven by live ops, favouring design decisions that are authored - or at least corroborated - by the community.

Hutch’s Ian Griffiths will also detail the components of any live ops backend, while Tim Shepherd of Wooga gets to grips with why it matters for casual games.

And you won’t want to miss the panel asking ‘What is the gold standard for live ops?’, chaired by Christianne Amodio, senior director at Glu Mobile.

Dr Greg Buchanan is a freelance writer and narrative designer who has worked on No Man's Sky: Atlas Rises/NEXT, as well as titles for Sony, THQ Nordic and more.

In his seminar, Buchanan will look at how game writers can exploit time as a narrative tool. Discussing how apparent story constraints can be viewed as opportunities if we alter the types of narrative we are attempting to tell, the talk will provide attendees with practical ways to create short bursts of narrative and associated time mechanics for compelling and innovative games.

John O'Malia, director at Wingman AI Agents, will look at the benefits and practicalities of using AI in your game, while Dodreams’ Edvard Groundstroem points out the lessons game studios could learn from IKEA from a service design perspective.

And keep some time free for Roblox developer Joshua Martheze and his fireside chat in conversation with our very own senior editor, Craig Chapple.

The show will attract over 2,500 delegates from all around the world, including Europe, Asia and America. Away from the show floor, the conference schedule features 12 tracks of seminars from 300 of the industry’s finest, covering mobile games, handheld consoles, and VR and AR.

Mobile, PC and Blockchain - your ticket will get you into all three shows and all 25 conference tracks.

Get your 20 percent discount with our Early Bird prices and book now!