Industry trends, hypercasual games, VR, AR, consoles and the future - it’s all at the January event. 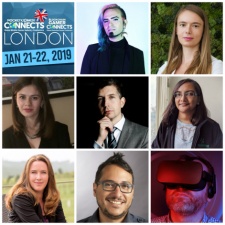 Europe’s biggest B2B expo and conference for the mobile games industry returns to the UK to kickstart a year of international events with Pocket Gamer Connects London on January 21st to 22nd 2019.

Here are the latest speakers that have confirmed for the New Year event.

And for a data-driven session, you won’t want to miss GameAnalytics CEO, Ioana Hreninciuc, revealing the latest global trends based on insights from three billion mobile gamers.

The games industry as an island and how it can reconnect with the cultural and creative world.

Recognising that the games industry is about more than just business, we’re taking a look at its culture both within the sector and its impact on the wider world.

King’s head of studio Todd Green will take part in a panel about Britain as development culture and deliver a thought-provoking session on the games industry as an island and how it can reconnect with the cultural and creative world.

Resonance House’s Rosemary Lokhorst asks, ‘Can a game be therapy for emotional health?'. The presentation will reveal the results of their internal study into how games can empower teens dealing with serious health challenges, as well as how the research informed design decisions on free mobile game, Shadow’s Edge.

And Adam Holmes will speak for War Child about why games companies are collaborating with charities, raising over $3m since 2016 to support children affected by war. This session will dive into the impact charity events have on in-game player retention, increasing brand value, and driving player behaviour in-game (such as engagement and PAU).

It will also focus on best practices for working with charities, covering selecting a charity that fits your game/ audience, how to incorporate a charity into your game, and how to engage your player base with charity events.

We’re looking forward to Elie Abraham’s presentation on gender and romance in games too.

Future platforms, opportunities and potential for the games industry.

We’re sure of a very warm welcome for Resolution Games CEO Tommy Palm as he returns to the Connects stage to look forward to how developers can bring AR games to the masses in 2019.

Hear from one of the initial VR/AR gaming innovators on what’s holding developers back from building successful AR titles, how to take advantage of today’s tech to enable stellar AR games experiences, and what has been learned from previous gaming platforms that can be implemented with AR.

Drunk-Fu made the leap from mobile to Xbox One and is heading back to handsets soon. Sako Salovaara, CEO at developers Rusto, explains how unexpected opportunities can lead to the unknown.

And the always entertaining Psytec Games founder Jon Hibbins will share his unique perspective as part of a panel debating future platforms, opportunities and potential for the games industry.

Europe's biggest B2B event for the mobile games industry - now with added PC and blockchain too.

The show will attract over 2,500 delegates from all around the world, including Europe, Asia and America. Away from the show floor, the conference schedule features 12 tracks of seminars from 300 of the industry’s finest, covering mobile games, handheld consoles, and VR and AR.

You could speak at the biggest Pocket Gamer Connects London ever