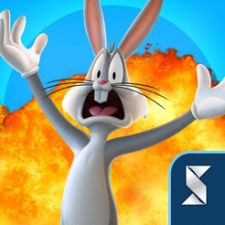 US publisher Scopely racked up more than one million downloads for Looney Tunes: World of Mayhem on launch day.

Developed in partnership with Aquiris Game Studio, the title is a multiplayer RPG available on the App Store and Google Play.

The game’s release was supported by a ‘Crushathon’ livestream in which various objects were smashed - typically with an anvil.

The campaign is said to have generated eight million impressions with an average engagement rate of eight per cent. This is thought to be double what is typically seen for branded content on Facebook.

Instagram influencer Zach King was also tapped to star in a video to support the game's launch.

According to App Annie data, Looney Tunes: World of Mayhem has ranked just outside the top 100 on the US App Store grossing chart since launch.

The game’s launch comes shortly after the release of another Scopely title, Star Trek Fleet Command, developed in partnership with Digit Game Studios.

That release has also positioned itself in and around the top 100 grossing performers on the US App Store.