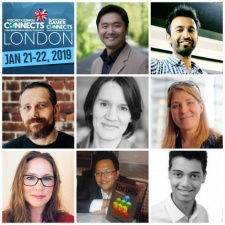 The UK’s biggest B2B event for the games industry returns to the UK this month to kickstart a year of international events with Pocket Gamer Connects London on 21st to 22nd January 2019.

We’ve already revealed speakers from CCP Games, King, Rovio Entertainment, Supercell, Tencent and Unity - you can find out more about their seminars in our previews one, two, three and four.

Today we’d like to share news of even more speakers that have joined the roster for this month’s event.

Guy Ulmer, platform technology specialist at Plarium, will show you how advanced device research can revolutionise your mobile game production. Going beyond the straightforward tools, Ulmer will share advanced methodologies and tips on how to leverage (and cross-reference) less obvious sources of information that can be of great value to any mobile studio.

Wappier CEO Alex Moukas will look at how you can use loyalty programs to increase engagement and retention outside of gameplay. Explaining that it’s not only cheaper to retain an old customer than acquire a new one, but a five per cent increase in retention can lead to 30 to 100 per cent increase in revenue, Moukas will focus on specific loyalty tactics, how to set up a program without affecting the underlying gameplay and share case study results from over 30 mobile games.

Braavo’s VP of business development and GM West, Sebastian Storfner, will also speak as part of the Show Me The Money track on the opening day of the show.

For a tighter focus on publishing In Asian markets, don’t miss the ‘How To’ discussion panel moderated by Allison Bilas, COO at JoyPac. She’ll be joined by Chorus Worldwide’s Shintaro Kanaoya, Harry Holmwood of The Secret Police, and global hardware challenger Huawei.

Heita Miyoshi, H2 Interactive Founder and CSO will also offer up comparisons of the Japanese, Korean and Chinese markets.

How to make great games without crunch to avoid mental health problems.

The practice of crunch in video games development had a lot of exposure in 2018, with more brave professionals speaking out about the impact it can have on mental health. In this panel debate chaired by Kate Edwards, you’ll hear how to make great games without unnecessary crunch to avoid mental health problems for your team.

Join us for Pocket Gamer, PC and Blockchain Gamer Connects London - the biggest exhibition and conference of its type in Europe.

The show will attract over 2,500 delegates from all around the world, including Europe, Asia and America. Away from the show floor, the conference schedule features 16 tracks of seminars from 300 of the industry’s finest, covering mobile games, handheld consoles, and VR and AR.

You could speak at the biggest Pocket Gamer Connects London ever