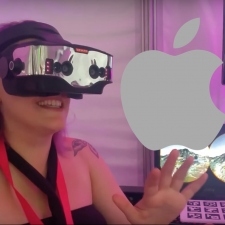 A patent filing by Apple from 2017 has surfaced in the last week that suggests the tech giant may be working on a virtual reality/mixed reality headset.

The document, published by the US Patent and Trademark Office on March 28th 2019, focuses on range finding and accessory tracking for VR/MR head-mounted display systems.

The patent application states the range finding sensors, such as ultrasonic transducers, could be housed on the headset itself, as well as on the controller that the user holds.

This would enable the technology to track distance and nearby walls, objects and other obstacles in the immediate vicinity - effectively helping to stop the user from walking into them. Example environments referenced include rooms, gyms, yards, fields or other unconstrained physical locations.

The images below come from the patent filing showing some examples of how the technology could work on a headset.

It’s not the first time Apple has been reported to be working on its own headset. Last month MacRumours released a report stating that Apple has hundreds of staff working on VR and AR projects.

The company has already made investments in the AR space with ARKit and ARKit 2, which supports the development of augmented reality games for iOS devices. Apple also acquired AR start-up Vrvana for a reported $30 million back in 2017, a company thatt had worked on the Totem headset.

With technology rivals stepping into the VR/AR hardware space, and slowing sales of the iPhone, it’s possible that Apple might see some value entering the fray itself.

It should be noted however that a patent filing does not mean Apple will release a headset or that hardware will be coming in the near future.

Apple has recently been expanding further into the services space rather than into the hardware sector. Last week it unveiled a premium-like games subscription service called Apple Arcade. The jury is out on whether it's set to make a splash, though our contributing editor Jon Jordan took to comparing Apple's vision of the future of gaming to Google's and its new Stadia streaming platform.

Augmented reality will be a topic of discussion at Pocket Gamer Connects Seattle 2019 on May 13th to 14th.