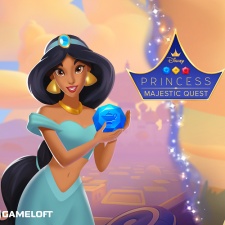 Taking place in the Disney Princesses’ own realms, Majestic Quest will see players helping the likes of Jasmine and Belle to rebuild their kingdoms after a magical storm. The gameplay revolves around matching puzzles together while new stories unfold.

Getaway Blast meanwhile reinvents characters from the world of Disney and Pixar in new styles, with fans able to collect them all through physics-based puzzles. Fans can expect Mickey Mouse, Aladdin, Stitch and more.

The two titles are currently in a beta stage, with both due to launch on mobile devices later this year.

In 2016 Disney halted all internal game development and has been actively working with select developers on utilising its IP. These titles are the first licensed games from Gameloft to come out of the agreement.

“We are proud to collaborate with Disney, a company whose stories and characters are beloved by hundreds of millions of fans,” said Gameloft CEO Stéphane Roussel.

“These new titles from Gameloft Kharkiv and Gameloft Budapest reaffirm our commitment to a broad portfolio of games that delight and entertain a diverse audience of players and showcase our expertise in creating carefully crafted gaming experiences.”

It’s not the first time Gameloft has utilised Disney IP. It previously found success with park builder Disney Magic Kingdom, which has amassed over $113.9 million (€100 million) in revenue worldwide as of December 2018.

Disney’s other collaborations include a partnership with mobile developer Glu on a new card game called Disney Sorcerer’s Arena.