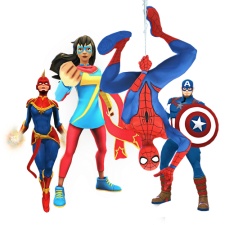 The title sees users able to create their own comic books while helping to develop the language and reading skills of children between the ages of nine to 11.

The storyline adapts to the player’s age by using shorter and simpler language for younger audiences, with more complex tasks applied for the older demographic.

Many familiar superheroes appear in the app, including the likes of Spider-Man, Ms. Marvel and more.

Marvel Hero Tales is available to download on the App Store and Google Play now.

“This is the most personal project I've ever been involved with,” said Kuato Studios CEO Mark Horneff

"Not just because of my love of the Marvel Universe, but also because as a child with undiagnosed dyslexia, school, and particularly reading, was incredibly challenging for me. I remember one day when I was eight, my mum picked me up from school and gave me a copy of Spider-Man - my very first introduction to Marvel.

“From that moment on I was hooked; I read it cover to cover every day. Those adventures fed not only my imagination but my confidence as a storyteller and my passion for reading. My hope is that Marvel Hero Tales will inspire a new generation of Marvel readers and storytellers, and in some small way, allow that eight-year-old to repay some of the debt I owe to.

Kuato previously collaborated with Disney on a storytelling app called Disney Story Realms, which launched on mobile back in February.