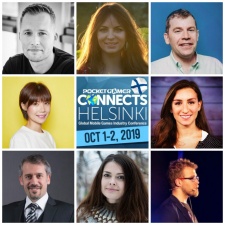 Finland’s biggest B2B event for the games industry returns NEXT WEEK for its sixth anniversary in the mobile gaming motherland with Pocket Gamer Connects Helsinki 2019!

Don’t miss out and grab your tickets now!

Held on October 1st and 2nd at The Cable Factory, the 16-track conference schedule features an amazing list of industry experts sharing their analysis, insight and experiences.

We’ve already introduced you to speakers from the likes of Rovio, Remedy Entertainment, Wargaming, Tenjin and many more.

With just days left before the event, it’s time to share the very latest speakers that you can hear from - and connect with - next Monday and Tuesday.

We’re thrilled to reveal that David Mason of Rovio is taking part to discuss the company’s cloud services for games. Hear from Mason about how Rovio built Beacon to bring its games to life, run live ops and experiments, target, analyse, test, support and monetise with IAPs and Ads.

As Beacon supports tens of millions of players and serves thousands of requests per second from all around the world, it captures four billion analytics events per day, making this session a must-see on how household name Rovio does it.

EA’s Studio Technical Director for mobile game studio Tracktwenty, Matti Palosuo shares his thoughts and experiences within the games industry over 15 years of experience. Together with Thomas Hulvershon of Outplay Entertainment, plus CEO of East Side Games Josh Nilson, Palosuo also takes part in a panel of experts to discuss how to keep your game alive.

Facebook Gaming’s Joy Marianowicz heads her own superstar session focusing on the success with instant games across Facebook. Since the launch of its HTML5 gaming platform, Facebook has achieved over 30 billion games played. Marianowicz will talk about how to find success reaching global players on Facebook and beyond.

We’re really looking forward to GameRefinery’s Joel Julkunen and his seminar helping you get the most out of third-party IP - now more important than ever to know how to use them effectively for optimal results. Looking at genre, feature-set and demographic fit of IP vs. game mechanics, Julkunen brings the topic to life with real life examples of both do’s and don'ts to take onboard.

ESL - Turtle Entertainment’s Fabian Scheuermann applies his esports expertise as he looks at how mobile games became a core growth-driver of ESL’s esports ecosystem strategy. Genvid’s Chris Cataldi leads a session on interactive livestreaming and the future of esports and how new forms of engagement, monetisation and experiences become possible, leading to entirely new games and audiences. Cataldi showcases some of the latest examples of premium interactive streams alongside a vision for the future.

With esports continuing to gain headlines, Marek-Martin Matyska of Geewa delivers a keynote speech focusing on game design for competitive gaming, as well as how to translate ideas and mechanics into systems and maths formulas that decrease the need for live ops maintenance.

As part of a speaker roster featuring the biggest names in the games industry, Microsoft’s Mark Val looks at Live Ops psychology to influence player behaviours and how player psychology impacts game design and live operation. ChilliConnect’s Richard Sanderson and Nazan Ünlütürk team up once more to explain how to leverage Live Ops to make a killing.

Marja Konttinen, Marketing Director at Hatch Entertainment, dives into what’s happening in the kids category of mobile games in her keynote speech, while Isaac Roseboom of deltaDNA looks at the good, the bad and the great of player engagement in gaming.

And as hypercasual continues to be one of the hottest trends in games right now, get the lowdown on pitching your hypercasual game to publishers and players with business development and publishing manager Tamara Feiman of Gismart. Hear an overview of the current mobile gaming market and how to choose the publisher that’s right for you. Stella Zhu of Mindworks and Mintegral also looks at how creatives can win the hypercasual race.

Sisu Game Ventures’ Kalle Kaivola connects with Derk de Geus of Paladin Studios on a panel sharing the challenges of opening your own company - a must-see for any lone developer looking to start their own business. And for a broader look at the challenges of games as a business, don’t miss Celine Pasula of Fingersoft debating in another panel session.

Vungle’s Anna Badalamenti insightful keynote is dedicated to helping developers improve their monetisation strategies, while AppLovin’s Carl Livie discusses the best strategies for dealing with an ever more expensive user acquisition funnel with a panel.

In another keynote, Serge Landry of Nutaku explores the rise of the adult gaming market. As developers are struggling to get funding and ensure discoverability of their games in the mainstream, Landry puts the spotlight on this new market by looking on the main stores’ issues and highlights how studios can expand their business into the adult sector.

Nordic Game Fund Management’s Timo Ylikangas discusses with Hothead Games’ Gregan Dunn and RocketRide Games’ Louis-René Auclair on a panel about the benefits of using IPs vs creating new ones. And in another panel, Blockchain Cuties’ CEO Vladimir Tomko discusses the state of blockchain currently and whether it’s time to put up or shut up.

And the panels keep coming, with Boombit’s Alina Gribanova analysing global publishing and business trends. London Venture Partners’ Harri Hamer is joined by Samuli Syvähuoko of Sisu Game Ventures, Alexey Sazonov of Panzerdog, Aurelian Merville of Phoenix Games and Futureplay Games’ Jami Laes on a panel looking at how mergers and acquisitions are changing the face of the gaming business.

Speaking of Futureplay Games, we also have Chris Wilson hosting a session on how they switched up what their marketing budget is spent on, from user acquisition to influencer marketing - and how it failed them.

Seriously’s Tess Thormodsgaard also considers influencer marketing, as well as uniting with Matchmade’s Mika Patiala on a speed panel looking at the challenges and opportunities of working with influencers.

Ever wondered how to go about launching your apps and games in China? Aaron Denford of APPTUTTi explores the current avenues for developers to launch their games, how much it would cost to do so in the Chinese market and argues why you should publish in China, highlighting the potential for game creators publishing in the world’s largest mobile market.

Mobvista’s Alexander Janssens offers advice on growing your games successfully in China. He’ll give a brief overview of China’s mobile media ecosystem, show you the do’s and don’ts of launching your game in China, with 10 tips and tricks on how to be successful with your game, while using a case study example and presenting Mobvista’s top media marketing solutions.

And JoyPac’s Falko Boecker debates whether Asian markets are still a mystery as part of an expert panel with Don S Kim of Lucrion, Mikael Leinonen of MyGamez, and Thomas Lee of Room8 Studio.

The more the merrier!

Phew, now that is a lot of speakers! But the fun doesn’t stop there, as we have a lot more key industry figures lined up:

You can view the full live schedule on the official event site now.

As well as the incredible conference schedule, Pocket Gamer Connects also features a whole host of networking opportunities and events:

Time is running out to book your tickets for NEXT WEEK’S Pocket Gamer Connects Helsinki. Make sure you don’t miss out and book now!

That’s it for Helsinki now, but if you’d like to speak to our audience, we'd love to hear from you! Submissions are also open for future Connects events in Jordan this November - and even London in January 2020. If you’d like to speak at any of our international events, get in touch using this form or email patty.toledo@steelmedianetwork.com.