Star Wars: Galaxy of Heroes from EA tops the group at $924 million 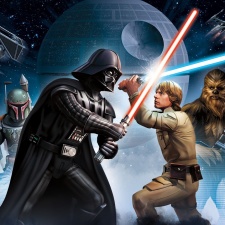 Star Wars mobile games have surpassed more than $1 billion in lifetime revenue across the App Store and Google Play, according to Sensor Tower.

Active titles over the last six years have made up the global player spending figure, with Star Wars: Galaxy of Heroes from Electronic Arts topping the group at $924 million or 87 per cent of the overall. The collectable RPG is currently on track to cross the $1 billion revenue mark in 2020.

Following this was Zynga's Star Wars Commander, which has accumulated $93 million, or nine per cent, while LEGO Star Wars: The Complete Saga from Warner Bros. brought in $11 million, or one per cent, to claim third position.

The US accounted for the largest amount of revenue with $640 million, or 61 per cent, originating from players in the country. Germany placed second with $66 million, or six per cent, before the UK ranked at third at $57 million, or five per cent, of the total.

Download numbers for Star Wars mobile titles have reached 273 million, with Galaxy of Heroes taking the top spot at 70 million, representing 26 per cent of all installs. Rovio's Angry Birds Star Wars was the runner up at 63 million downloads, or 23 per cent, before that game's sequel took third at 61 million, or 22 per cent, of the overall.

The highest average revenue per download again went to Galaxy of Heroes at $13.20 per user spend.

Each mobile game has seen its highest grossing month every year hit after the release of the latest Star Wars flick, with The Force Awakens starting the trend in 2015. The only exception to this was in 2018 when Solo: A Star Wars Story launched in May.

Recently Gameloft rolled out a limited-time event that has seen content from Star Wars: The Rise of Skywalker appear in Disney Magic Kingdoms.