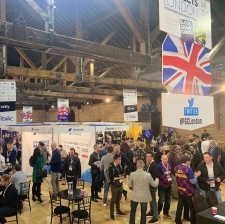 This week’s Pocket Gamer Connects London 2020 conference once again smashed previous records and secured its position as the UK’s leading b2b games event with over 2,460 delegates from 65 countries assembled at The Brewery.

Even the proximity of Chinese New Year, which slightly thinned a usually very large Asian crowd, couldn’t stem the tide of delegates from about 1,350 companies, who wandered the packed expo halls engaging with more sponsors and exhibitors than ever before (110 tables and booths).

They also listened to 310 speakers delivering 96 hours of content in 175 sessions over 28 distinct tracks, and ultimately getting down to business in 9,302 scheduled meetings - which translates to well over 11,000 once meets at the Investor Connector, SpeedMatch and Big Indie Pitch fringe events, plus self-organised meets, are factored in.

Whilst the event increased on all metrics from 2019’s already record-breaking outing, the show remained notable for its warm, open atmosphere and upbeat tone (in part reflecting another great year for the mobile games business and optimism about the year ahead).

Show me the Money

Using similar calculations to last year and based on anecdotal evidence, we’d expect this level of meeting activity at the scale of companies in attendance to contribute over £125 million worth of business activity via investment, publishing, user acquisition campaigns and other services.

As usual at Connects conferences, the event intentionally comprised a total cross-section of the ecosystem, with indies and student developers rubbing shoulders with C-level execs from the biggest triple-A publishers and investors, plus every key tool-maker, service company, platform and consultant also present, as well as the usual press core.

Whilst mobile games again formed the core of the event - as you’d expect from Pocket Gamer and for the largest part of the modern games industry - there was a strong presence for PC and console (thanks in part to our Big Screen Gaming side-event and accompany tracks and pitch events).

The emerging blockchain technology space was represented too, as the Blockchain Gamer LIVE! event united leading developers, platforms, tools and investors to debate the way ahead for the industry and celebrate the unveiling of the inaugural Top 50 Blockchain Games Companies list.

And there was more: the XR world, influencers and esports all got in on the act too, with their own tracks plus a larger vision and values track focusing on positive company culture, environmental issues and gaming for good ensuring the event had a conscience alongside the business brain.

Alongside the expo and tracks, there were also some notable fringe events, with Investor Connector opening a dragon’s den of 21 leading games industry money folk to developers and publishers; the Big Indie Pitch uniting indie devs with publishers, platforms and press (for mobile and PC/console); the Publisher SpeedMatch speed-dating style developer-publisher meeting segment and the ever-entertaining PG 2020 Sessions. Then after hours, the networking continued again at the lively VIP Reception and Party and the Mobile Games Awards ceremony.

Steel Media CEO Chris James was predictably buoyant: “When we launched Steel Media back in 2006, we set out to build games events and media that made a real difference to the industry, and I remain confident that now more than ever we are delivering upon that. I genuinely thought we’d struggle to top last year’s London event for volume of people, quality of content and overall ‘games industry family’ atmosphere but I am delighted to have been proved wrong.

"Obviously, much of the credit needs to go to my incredible team who pulled off five conferences and countless other events in 2019 and have started 2020 very strong - special thanks to Sally Kevan, Jez Bridgeman, Dave Bradley and Lisa Bissett and their respective teams – but also to the awesome companies and individuals that supported our vision to deliver something special, either with their sponsorship, sharing insight as speakers or just coming along and engaging with the show.

"Everyone at Steel Media (and indeed our new parent company Enthusiast Gaming) really loves this industry and are blown away by your support. We’re going to take a couple of days now to breathe out, but then we’ll be back even stronger doing our bit to ensure 2020 is the most amazing year for the games industry yet. See you in Seattle, Hong Kong, Helsinki and Jordan...and of course back here in London next year!”

True to James’s words, Connects London may have been the biggest show Steel Media has yet delivered, but it certainly won’t be the last, with four more Connects planned for 2019: Seattle (May 11th to 12th), Hong Kong (July 9-10th), Helsinki (September 29-30th) and Jordan (November 7-8th) before returning to London once again in January 2021.

You’ll be hearing a lot more about these and other Steel Media events in the coming weeks and months, but if you want to get ahead of the game and discuss involvement and sponsorship opportunities, contact Chris at chris@pocketgamer.co.uk. To submit a speaking or panel suggestion, please visit the official submission form.

Special thanks to our sponsors:

The Pocket Gamer 2020 Sessions land in London this month!