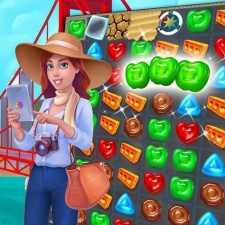 Taking place from March 3rd to 13th, the new limited-time event will see the Seattle-based studio feature "influential and groundbreaking" women from throughout history in its match-three puzzler, Gummy Drop.

Figures set to appear include Valentina Tereshkova, the first women to fly into space, a pharaoh of ancient Egypt, and other modern representatives for social justice and equality. Players will encounter these famous faces by unlocking a new set of levels each day.

Inspiration for the in-game event originated from the Good Night Stories for Rebel Girls book.

"The aim was to span history (from ancient to contemporary) and diversity across the globe as much as possible," said Big Fish Games narrative designer Jean F.

"We also wanted to include a mix of slightly lesser-known women alongside better-known names, as well as some diversity in their professions and main fields of study,".

In the lead up to International Women's Day 2020, PocketGamer.biz is spotlighting a number of women from the games industry under our Jobs in Games series, all this week.

We kicked off the week by speaking with Rooster Teeth’s Alanah Pearce on the many faces of content creation.

Following this, we then discussed how Kitfox Games' Victoria Tran made the shift from healthcare PR to the games industry.