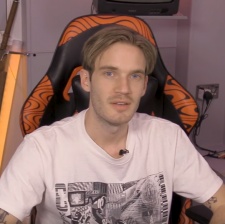 The move will see him broadcasting exclusively on YouTube from now on, presumably from his channel of 104 million subscribers. Kjellberg has been streaming on DLive for the last year, a blockchain infused streaming platform.

"Live streaming is something I'm focusing a lot on in 2020 and beyond, so to be able to partner with YouTube and be at the forefront of new product features is special and exciting for the future," Kjellberg said in a statement.

The creator took a break from YouTube at the back end of the last year, because he was "feeling very tired", as well as detailing other issues he has with the Google-owned platform.

In a video made at the time, Kjellberg called YouTube an "anarchy system" where if one creator goes too far, they will be called out by other creators and accuses YouTube of "ruining the fun".

"The rule is if you do dumb sh*t on YouTube, you will get called out on it. We need that, it's the only thing keeping us sane," he added.

However, it seems as though Kjellberg is willing to let bygones be bygones for a large sum of streaming money. As long as he can hold in the racial outbursts, he should be fine.

This story first appeared on InfluencerUpdate.biz