The iOS title generated $3,500 after adding a premium option 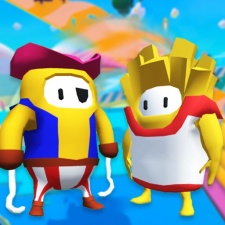 Update: Fall Gang: Knockout developer Keleman Tamas has responded to PocketGamer.biz claiming that the game was removed from the App Store after Devolver Digital contacted Apple.

"Devolver Digital didn’t like being exposed and that’s why he told Apple to take it out," wrote Tamas via email.

When pressed by what Tamas meant by "exposed" he replied with: "Because it’s very similar to their game so he made an announcement at Apple, and Apple called on us to take it out."

Tamas also confirmed during the email exchange that while Fall Gang: Knockout has been taken down, he is now working on a "similar one that will be multiplayer".

Developed by Kelemen Tamas, Fall Gang picked up 81,000 downloads following its launch on July 22nd, 2020. The game peaked on August 7th when it accumulated approximately 27,000 installs, all according to Sensor Tower data.

Fall Gang became inactive on August 9th, with a quick search on the App Store now failing to show the game in any capacity.

Leading up to the official launch of Fall Guys on August 4th, Fall Gang was generating more than 1,000 installs a day, but at that time had no in-app purchases and only made money via in-game ads.

This seemingly changed shortly afterwards, with the introduction of a premium price tag of $2.99 from August 7th onwards. During the three days Fall Gang went premium - before being pulled from the App Store - the game picked up $3,500 in player spending.

It's likely that the game has been removed due to IP infringement, though no confirmation has come from any of the parties involved as of the time of writing.

Look how they massacred my boy pic.twitter.com/TveIm90rUu

PocketGamer.biz has reached out to Apple, Mediatonic, and Kelemen Tamas for comment.

The App Store has been seeing a lot of removals lately. Most prominently, Apple removed Fortnite from the store after Epic Games implemented an alternate way of paying for V-Bucks (its in-game currency) that subsided the 30 per commission that Apple takes.