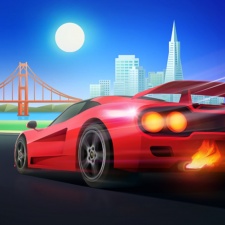 As announced on Twitter, the popular driving game has raced through the milestone in time for its fifth anniversary.

"Today we're glad to celebrate the five Year Anniversary of #HorizonChase with more than 50 million downloads. This is only possible due to the awesome support we've received from all of our players. Thank you," said Aquiris Game Studio.

Horizon Chase - World Tour was released in August 2015 worldwide for both iOS and Android devices. As the game proved to be successful, a successor dubbed Horizon Chase Turbo was released for PlayStation 4, Xbox One, and Nintendo Switch last year.

To mark the occasion and celebrate two milestones, there will be various in-game awards and events, as reported by our sister site PocketGamer. All players, regardless of whether they have the free-to-play or premium version, will get access to special weekly challenges. Should they be completed, players will be rewarded with a special anniversary skin.