Has your game made the Pocket Gamer People's Choice Award 2021 finalists? 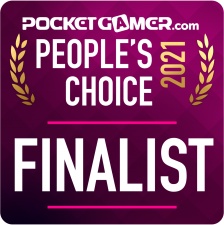 The lobbying phase of the Pocket Gamer Mobile Games Awards 2021 may have closed (we'll be announcing the shortlist soon) but voting for the hotly contested PG People's Choice is now open.

This is one of the awards' key categories, for which readers of our consumer-focused sibling site PocketGamer.com nominate – which they again did in their thousands – their favourite games experience of the last year.

Given the volume of submissions, the 20-strong shortlist we've ended up with offers a luscious gaming landscape in both approach and genre, from reworked casual classics to retro revivals, awesome arcade action to serious strategic simulation:

Ask them and they will vote

Now that the finalists are live, we're giving PG.com's readers a month to vote for the one they feel should win.

And if one of the games on the list happens to be yours, you can encourage them to do so too – there is nothing in the rules that prevents a studio from getting its audience involved. The only thing to be aware of is that Pocket Gamer People's Choice Award 2021 voting closes on June 30th, 2021.

Meanwhile, the fourth outing of the PG Mobile Games Awards – with its 22 categories set to celebrate every sector of this industry – forges ahead and is set to take place on Tuesday, July 20th at a central London location (pandemic permitting) – tickets will be available soon.