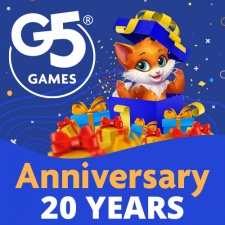 G5 Entertainment, the Swedish publisher and developer of free-to-play games for smartphones, tablets, and personal computers, is celebrating 20 years in business with a week of special offers for players.

G5 has been a public-traded company for the last 15 years, with the last seven of those on the Nasdaq Stockholm exchange.

In 2021, the company marks its 20th anniversary with a global team of more than 800 people, across seven offices in five countries, and a growing portfolio of more than 20 free-to-play games. In 2020 the company generated $150 million in revenue from a global audience of 250 million players, across 192 countries.

"We sincerely love what we do — creating a variety of games that not only bring joy to millions of people around the world but also revive their interest in literature and history," said G5 Entertainment CEO Vlad Suglobov.

"On this momentous occasion, we’d like to thank our players for staying with us for such a long time! It is they who inspire us every day to make amazing games that they can play on any device!"

According to G5, on a daily basis its games:

G5 Entertainment plans to continue creating games for different audiences across all devices.

Visit g5e.com, to find games for your favourite device.