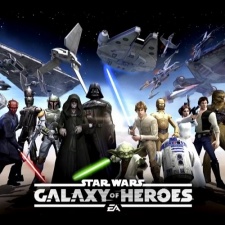 EA has revealed that Star Wars: Galaxy of Heroes has surpassed 100 million downloads.

The date was revealed in the firm’s quarterly financials report however did not further discuss the game’s active user base.

Galaxy of Heroes originally launched in 2015, with EA providing additional content throughout the game’s lifetime, often coinciding with the most recent release of films and TV series, such as The Mandalorian.

According to Sensor Tower, Galaxy of Heroes has generated approximately $1.4 billion in consumer spending across the App Store and Google Play.

The largest contributors to this amount is the US, where players have spent $850 million, followed by Germany and then the UK.

From Q1 to Q3 2021, Galaxy of Heroes has accumulated more than $170 million worldwide, indicating the persistent demand for the game.

Galaxy of Heroes has been the best performing Star Wars mobile game, generating over 98 per cent of all revenue from the past five mobile games in the franchise.

EA CEO Andrew Wilson stated that this quarter has been the "strongest second quarter in company history".

EA's upcoming mobile game, Battlefield Mobile, is currently being tested in Indonesia and the Philippines. EA subsidiary Industrial Toys is leading the development of the title.