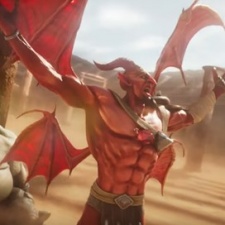 Jam City has revealed the launch of a new division specialising in blockchain games and its first Web3-exclusive game, Champions: Ascension.

Prior to to the launch of Champions: Ascension, Jam City is going to release a limited run of 10,000 NFTs called Prime Eternals, the "ultimate ascension tier" within the Champions world. To begin with, this will be a whitelist-only sale.

"Web3 gives us the opportunity to incorporate player input, direct ownership of the characters, and ultimately player agency that is not currently possible with standard game technology," said Jam City co-founder and CEO Chris DeWolfe.

"With Champions: Ascension, Jam City has the opportunity to help define this next generation of gaming – this is why we’re so bullish on investing heavily in multiple Web3 projects."

Jam City has stated that players can influence the world of Massina by the use of blockchain technology. Holders of the 10,000 NFTs will have the greatest potential for earning in-game and will have exclusive access to specific gear. Additionally, they will be able to give direct feedback and vote on new characters and products in the future.

"We’re taking our long-term expertise and knowledge of gaming and blockchain to create a highly dynamic and truly unique experience, and we’ll be involving our community in building and executing our roadmap in a way many have promised but few have managed to meaningfully deliver on," commented Jam City president and COO Josh Yguado.

"The beauty of Champions is that it will be rolled out across multiple platforms, and players do not have to be crypto experts to get involved. We are re-drawing the rules when it comes to engagement and ultimately will provide a deeper, richer, more rewarding experience that allows players to generate real income while playing the games they love."

Jam City plans to introduce more tiers with multiple levels of earning potential. Forging gear and building structures will also be added, with gear able to be sold on a player-to-player marketplace.

DeWolfe added, "This launch marks a natural evolution of our strategy that will open up exciting new opportunities for growth. We look forward to continuing to invest in our Forever Franchises and introducing new free-to-play games."

Neowiz recently revealed that two of its most popular titles, Golf Impact and Brave Nine, will be expanded to include blockchain-based content.