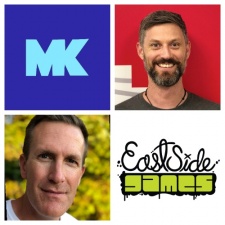 The agreement will see the two studios co-develop original IP and licensed properties over the next two years, for a total of four new games.

Founded in 2010, Australia-based Mighty Kingdom has developed over 50 games leveraging existing IP, such as Peter Rabbit and Lego, as well as original development.

Leaf Mobile subsidiary East Side Games, based in Vancouver, Canada, has a history of developing mobile titles based on popular television series, including The Office, Ru Paul’s Drag Race, and Trailer Park Boys.

Currently, the two studios have been working on the development of an unannounced mobile title based on a popular pre-existing sci-fi franchise. The new game is expected to give players a "story-rich idle experience" and is expected to be released early this year.

"Our work with ESG has been fantastic thus far, and we’re excited to strengthen our relationship," said Mighty Kingdom managing director and CEO Philip Mayes.

"Between our combined pools of creativity, experience and technology, we know that with ESG, we’ll deliver rich experiences to players for years to come – both original stories, and well-known universes."

Earlier this year, Mighty Kingdom went public on the Australian Stock Exchange (ASX) and used the money from the IPO to scale its team to work on larger projects.

East Side Games CEO Darcy Taylor added: "This expanded partnership with Mighty Kingdom is a testament to the quality and performance of our Game Kit technology that allows for a material decrease in the typical build to launch timeline for mobile games developed on the platform. Having Australia’s largest independent game developer join us for an additional three games speaks volumes about our platform. We couldn’t be more excited to expand our relationship with Mighty Kingdom and can’t wait to see the finished product!"

In May, ESG revealed a partnership with Game Masons to develop a "sports-themed" mobile game which is expected to be released on iOS and Android devices later this year.