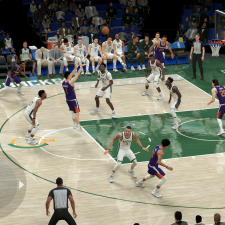 Take-Two Interactive is currently facing a class-action lawsuit regarding the presence of loot boxes in its NBA 2K games.

The lawsuit, filed earlier this year in Illinois, has accused Take-Two’s loot box system – with virtual currency used for purchasing – of being "unfair, deceptive and unlawful".

Whilst not directly referencing NBA 2K22, the latest entry in Take-Two’s basketball game series, it is noted in the lawsuit that the series of games already sell for the standard retail price.

Furthermore, it accuses Take-Two of encouraging further spending on in-game content after already buying the game. One such method is by making the in-game currency difficult to obtain through gameplay, and another is discounting prices of larger purchases to entice players to spend more money than they might otherwise need to.

Alleging that loot boxes cause "psychological distance" between players and tangibility of the financial nature of in-game spending, the complainant is seeking a minimum of $5 million in damages.

The lawsuit states: "The fixed price model, where customers purchase NBA 2K to access its content, is deceptive where customers believe they will have a comprehensive playing experience after their transaction, only to find out the game is littered with microtransactions which are necessary for players."

It also claims that minors are particularly vulnerable.