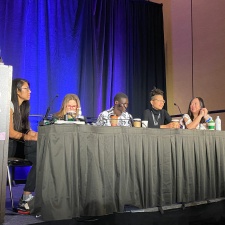 Susanna Pollack is the President of Games for Change, the leading global advocate for the power of games and immersive media as drivers of social impact. In her role there, she produces the annual Games for Change Festival, the largest industry-facing gaming event in New York, dubbed by national media as “the Sundance of video games.” The event attracts industry leaders across game design, emerging technology, media, foundations, government agencies, academia and brands.

In 2017, Susanna launched XR for Change to focus on building a community of practice around how immersive technologies are offering radical new ways to improve lives.

With a commitment to learning and education, Susanna also developed a portfolio of programs that advance the use of games and immersive media in learning. She launched the G4C Student Challenge with the NYC Department of Education in 2015 which now a national program that reaches 10,000 students annually. The program has attracted world class partners including the New York Times, NYC Mayors Office, ACLU, General Motors, Truth Initiative, National Geographic to offer a games design challenge to underserved middle and high school students across the country. For Verizon, she led the development of an XR Hackathon program that is currently being rolled out to 20 Verizon Innovation Schools over the next 2 years.

Prior to Games for Change Susanna worked across both the commercial and public sector. Over a 14 year period, Susanna held various senior level positions at BBC Worldwide Americas, including SVP of the US television distribution division where she led a team of 20 to raise $50m annually from coproduction and sales of BBC’s award winning documentaries and scripted content. She was also SVP of BBC Worldwide’s Children’s where she led the strategy of all youth related initiatives in the US including channel and IP development.

The panel, equipped with a trio of Pocket Gamer Connects veterans, opened by acknowledging the amplification of games consumption since the start of the pandemic and the enhanced responsibility of the industry to utilised this for wider social benefit.

This is the third time a GDC panel has explicitly namechecked late stage capitalism as a behemoth to be overcome, but the panel was cautious that the industry needs to carefully pick its battles.

Pollack said: “The platform is important, as is understanding the context and impact goal you want to achieve. If you’re reaching out to school children, you might choose to develop a browser game. To tell the story of refugees, you might decide on a mobile game.

“On a wider level, I’ve been thinking a lot about mental health among young people recently, as we think about curation and, from a wellbeing and equity standpoint, ensuring young people – particularly people of colour – have access to education and can see themselves in a position to create change.”

Estaris posited that “understanding what drives players” and embedding means for players to readily participate in social change through games has to begin at the development phase, and requires carefully aligning the desires of the dev team with the players themselves to be truly impactful.

Mayen is developing a ‘high-tension runner game’ that puts players in the shoes of a refugee forced to flee a war-torn region. It’s a theme that has both intense personal resonance and a powerful wider in light of Ukraine: “I spent about 25 years in a refugee camp, and I feel a lot of people do not understand the plight of the refugee. Games are a really powerful tool where people can learn, communicate, and understand what is going on in the world.

“The games industry is enormously powerful. What you bring into your game, and what you want players to experience, matters.”

“Playing for the Planet tries to address this by using our existing player base, and to influence them. This includes incorporating messaging about climate change or biodiversity to rally them and give them a space to have these conversations within communities that already exist in the games space – clans, clubs, alliances.”

Fundamentally, many game developers look to create entertaining experiences, but this can be retained whilst encouraging socially-minded thinking is this retained. Estaris noted: “For Monumental Valley 2, we added a chapter that was inspired by discussions at the Green Games Jam.

“But ahead of the Jam, I wondered what would happen if we got climate change deniers. But we had the opposite: engagement was really high, the number of downloads doubled, and the reviews for the jam were beautiful. They spoke about nature, they wrote poetry, and in terms of evaluating success.

Pre-jam apprehension aside, the panellists have observed a greater engagement from players in general. Mensah-Bonsu stated: “It was actually our players that urged us into action in the wake of the 2021 global bush fires. We quickly created a fundraising bundle across our live games, but there is a very real desire to engage with [bush fire charitable causes] from our players.”

The responsibility of representing the games industry can’t be met by the players alone. As Mensah-Bonsu identified, “it’s important to get players involved but it doesn’t mean much if it’s not reflected at the studio level”.

While a wide number of mobile games entities have provided financial support including Supercell and Plarium since the start of the Ukraine invasion, Pollack mentioned: “I’ve seen an increase in studio involvement, especially from triple-A. But I’m most encouraged through reaching out to the studio’s people, and give them the opportunity to participate on the causes that matter to them.”

Mensah-Bonsu also expressed the importance of recognising that entities within games do not have to hamper themselves financial: “There’s a misconception that you have to be a non-profit. We have to acknowledge the infrastructure and budget to create the most good: like running a successful business, you need goals and budgets to make sure the scale and efficacy of support is … we have to myth-bust that misconception.