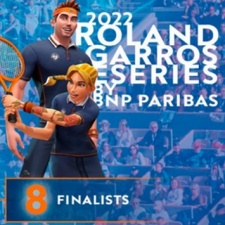 Roland-Garros (The French Open) eSeries by BNP Paribas has revealed details on its annual esports tournament, returning for the fifth consecutive year, and this time on mobile.

The tournament is to take place on Tennis Clash through a partnership with Wildlife Studios and in the event – organised by Fédération Française de Tennis (FFT) – four separate qualifiers will lead to eight finalists competing in a Grand Final at Roland-Garros on May 21 2022.

Tennis Clash has reached 90 million downloads across 241 countries, meaning many potential participants for the tournament. To further encourage participation, the Philippe-Chatrier court is being recreated for matches in-game.

"Based on the global popularity of Tennis Clash, it's only fitting that this game be selected for the Roland-Garros eSeries by BNP Paribas competition," said Tennis Clash game director Barak Shaked. "We're honored to have been chosen for this prestigious tournament and are proud of this partnership."

In partnership with Women in Games (WiG) France, one qualifying event is to be female exclusive to encourage more females to enter and guarantee that two female competitors will compete in the Grand Final.

A second qualifying event will be held in partnership with XP School, and the remaining two qualifiers will be open to the general public.

"Mixing traditional sport and esport, developing eTennis for all, these are strong issues for our federation, which wants to be a trailblazer," said FFT president Gilles Moretton.

"We are delighted to allow players of all levels and backgrounds to participate in this great tournament, which will make a special place for women this year."

To sign up for the competition, players must download the game and unlock Tour 3. There will also be an opportunity for players to purchase Roland-Garros strings through the Tennis Clash store to boost their in-game performance.

Wildlife Studios is entering the blockchain, NFT, and Web3 space