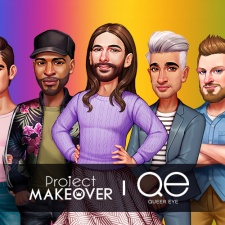 Released in 2020, Project Makeover has reached more than 67 million downloads, is swapping out its usual characters for the "Fab Five" for a limited time.

The partnership between Queer Eye and Project Makeover was facilitated by IMG, continuing the recent trend of cross-media collaborations. Roblox recently partnered with the Brit Awards to launch the first virtual VIP party for an awards show on the platform, and also released the newly revealed McLaren MCL36 as a virtual car in its McLaren F1 racing experience.

Magic Tavern, a partner studio of AppLovin, saw Project Makeover reach the top of the most downloaded game list in 142 countries.

Mike Chera, creative director at Magic Tavern, stated: “The partnership between Project Makeover and Queer Eye is one of the best examples of a collaboration between gaming and entertainment because of our shared views. We are honoured to appeal to such a diverse audience across age groups, gender, and more with a message of positivity. This is what made the Fab Five, whose show inspires fans around the world, the perfect fit for Project Makeover.

"We wanted the best for the Fab Five – we worked directly with them for their guidance so that we could ensure that players felt they were interacting with the characters from the show, and we are excited about what we were able to achieve."

Scout Productions CEO and Queer Eye creator David Colins added: "We’re thrilled about this partnership with Magic Tavern and can’t wait to see what fans come up with alongside Bobby, Tan, Karamo, Jonathan, and Antoni."

Cross-media promotions and partnership are becoming an increasingly important means of forwarding mobile brands. Netflix's recent announcement of its Exploding Kittens mobile game was accompanied by the reveal of an adult-oriented animated show, and Rovio recently spoke to PocketGamer.biz on protecting the Angry Brands IP and values outside of its mobile games.