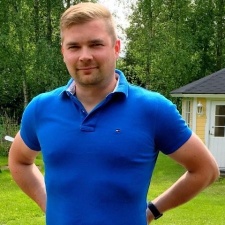 Jaakko Kylmäoja is the CEO of Fingersoft. He joined the company in 2013 as a product director

Today (Tuesday April 26), Fingersoft has announced it has surpassed of two billion downloads across its Hill Climb Racing IP.

The Finnish studio launched the original Hill Climb Racing in 2012 and its sequel came four years later. There is also an Android version available in China published with MyGamez that has reached over half a billion downloads.

Hill Climb Racing has reached this milestone on the year of its 10th anniversary, in which time it has grown from a one-man company to a games studio with over 100 employees.

The IP reached one billion downloads in 2018 and has gained steam since, accelerating to its second billion installs two years faster. The three titles have made more than €180 million ($192 million) in revenue cumulatively.

"We first launched Hill Climb Racing in 2012, which makes us quite the veterans in the mobile gaming industry already. However, it seems the charm of Hill Climb Racing shows no signs of fading, and out of the two billion installs more than 1.5 billion have been for Hill Climb Racing alone,” said Fingersoft CEO Jaakko Kylmäoja.

Kylmäoja added: "It is wonderful to see how our games still appeal to players after all these years, and that new players keep joining our community. To all of our players, we say thank you, two billion times and more."

Fingersoft published its latest game, Boom Karts – its first title outside of the Hill Climb Racing franchise – in 2021, and is currently developing more projects.

Meta Audience Network strategic partner manager Shri Gunasekera recently spoke with Fingersoft ad monetisation manager Otto Simola about the Hill Climb Racing series and its changes over the years, such as how when the game was first launched, "there was only one currency, coins, and the whole economy was based on that".