Apps to outpace games in terms of spending, but gaming predicted to remain the largest individual category. 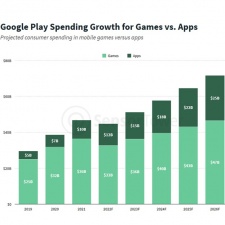 Sensor Tower has released its newest Mobile Market Forecast, predicting what the next five years hold for the mobile apps market and projecting that player spending on mobile games will reach $117 billion by 2026.

The global number of downloads is expected to reach 181 billion by that time with a compound annual growth rate (CAGR) of 4.7 per cent, an overwhelming majority of which will come from the Google Play Store.

As predicted by the forecast, 143.1 billion downloads will have come from the Play Store, versus 37.8 billion on the App Store.

Where pandemic-era consumer spending habits have now normalised, gross revenue from all app types on the stores is expected to climb up to $233 billion in 2026. This would mean a CAGR of 12 per cent, and whilst Sensor Tower expects higher downloads on Google Play, it is predicting more revenue from the App Store when considering all types of apps.

Growth is expected to stay low for the short-term as the market adjusts to changes post-pandemic - with mobile game revenue even decreasing for first time ever in Q1 2022 - but in five years’ time, Sensor Tower estimates that the App Store will reach $161 billion annually versus $72 billion on Google Play.

The report anticipates games representing a larger revenue share for Google Play than the App Store, with 65 per cent of the former’s revenue coming from mobile games and 43 per cent from gaming on Apple’s platform.

Whilst Sensor Tower expects apps on the App Store to outpace games in terms of spending, it is still predicting gaming to be the largest individual category.

Other areas explored in the report include first-time download expectations and regional variations, such as predictions that North America will lead in consumer spending growth and that Asia is going to see the largest increase in its app adoption rate.

Another recent report from Sensor Tower highlighted the growth of the puzzle game genre, which reached $5 billion in spending between April 1 2021 and March 31 2022.