Get to know the fastest growing games market in the world ahead of Pocket Gamer Connects Jordan, November 12-13. 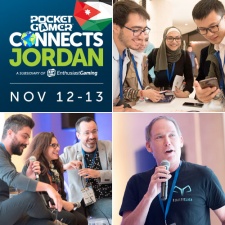 The conference action is going strong until the end of this year at Pocket Gamer Connects, and we have a very special event that you’re not gonna want to miss out on this November.

If you hadn’t already heard, we’re headed back to the MENA region this fall. After our conference in Helsinki this September, we’re returning to Jordan! We could not be more excited to bring our conference back to Jordan at an all-new glorious venue right by the Dead Sea, and we want to invite you to join us on the shore of one of the most historic locations in the world.

Today, the MENA region’s domestic market is the fastest growing in the world, tauting over 377 million estimated players

Beyond the location being absolutely unmissable, it’s the PG Connects conference you know and love on a bigger scale than ever before in Jordan. We’re bringing together over 700 games industry professionals from all over the world on November 12 to 13 for two incredible days of networking and insights sharing, and will be hearing from over 100 thought leaders from around the globe on all the hottest topics in the games industry today. We’re also bringing back our highly attended fringe events including The Very Big Indie Pitch, Investor Connector, Publisher SpeedMatch. You’re not going to want to miss out on this one!

It’s not too late to take advantage of our Super Early Bird discount so you can get your ticket to PG Connects Jordan for the lowest price possible. Head over to our official website now and book your ticket ahead of time – you will be saving hundreds of dollars!

Today, we’re taking a dive into the region’s games market to learn more about why this conference can be a key part in making essential connections for years to come – keep on reading to find out why this territory’s now considered the fastest growing domestic games market in the world!

A closer look at the gaming market in Jordan

The MENA region’s game revenue was valued at a whopping $1.78 billion in 2021, and it’s now considered to be a key growth region for the global video games industry. How exactly did we land here, though?

The evolution of the video game industry in Jordan can be traced back to 2003, when Maysalward, the very first mobile game studio in the region, was founded in the Middle East. The now-thriving studio achieved success through a Jordan-based team that focused on merging localisation and culturalisation to the local audience with cooperation with European game studios.

Today, the MENA region’s domestic market is the fastest growing in the world, tauting over 377 million estimated players – this is almost as many gamers as all of Europe combined (386 million) and much more than American (210 million). Along with this booming global success, there’s more and more local development talent sprouting in the area and creating for the local players, with Tamatem, one of Jordan’s leading developers that was founded just in 2013, now having a total value of over $80 million while specialising in localising internationally renowned games to suit Arabic-speaking users.

The growth in this region is beyond impressive, and it’s expected to reach new heights – a recent report suggests the MENA gaming market to reach more than $5 billion by 2025, with a majority of this growth fuelled by increased spending by current gamers, time spent in-game by users and surging advertising revenue according to the report by RedSeer. This is being linked back to a growing interest from consumers that are typically underserved in the region, spanning various demographics such as females and Gen X, as well as the overall gaming market boom provided by the pandemic over the past few years. Another report by Business Wire also believes that growth will also be driven by higher spending per user, and additionally attributes government support across games and esports. Governments in the MENA region are particularly supportive of the video games sector, with Saudi Arabia and the UAE having introduced policies to encourage game localisation, local game development, new studios and offices of international game companies and hosting major esports tournaments to encourage growth in the sector. This support is palpable with the massive growth and success experienced by new and emerging studios, and it’s part of why it’s so essential for developers and investors to keep an eye on this region.

The games sector in the MENA region is only growing, and Jordan is at the very heart of it all – joining in on making essential connections with the leading players in this area is going to make a world of a difference when it comes to doing business here, and there’s no place to do it like Pocket Gamer Connects Jordan this November.

The MENA games market is already booming and is only going to grow from here. We have some incredible, top-tier companies from the MENA region and around the world joining us, and we can’t wait to share the official names with you, but for now, we’re shouting out the likes of some amazing Jordanian games companies that need to be on your radar (which you may be able to spot at PG Connects Jordan!):

Further, it’s always helpful to know the taste of the gaming market, here are the top five titles that gamers in the MENA region are loving:

There’s no time like the present to book your ticket to PG Connects Jordan! Join us at the most glorious location by the Dead Sea in one of the most promising, thriving game markets in the world. Head over to our website now, you can secure hundreds of dollars off your conference ticket today with our limited time Super Early Bird discount!

Our biggest show in the MENA region yet kicks off this Saturday! Don’t miss joining us

Gaze into the future of the intersection between games and other media at Pocket Gamer Connects Jordan!

Our biggest show yet in the MENA region is happening this weekend – here’s everything you need to know!