The gaming accessory maker Turtle Beach has shown off the first photos of their Recon Cloud Controller, based on the Xbox gamepad design. 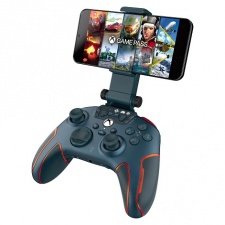 If you’re familiar with Turtle Beach you will know that their brand is, in a manner of speaking, inextricable from the Xbox and PC platforms. Turtle Beach’s headsets were considered to be as close as you got to pro gaming gear without paying a fortune on the Xbox 360, and their close affiliation with Microsoft’s products seems to be more explicit now if their latest release is anything to go by. Turtle Beach recently unveiled photos of their Recon Cloud controller in a press release from businesswire, showing the clear design mimicry of the original Xbox controller.

This is not their first foray into controller designs for Xbox and Windows, with the Recon and REACT-R controllers being the most recent examples. But it’s their first mobile compatible controller that prominently boasts of its cloud gaming features and compatibility with Android phones. The layout of the controller being essentially the same as their mainline PC and Xbox controllers, as well as boasting capability with the latter, indicate that this is intended to be as feature complete as possible for players.

So why is this notable? For one, it indicates another move towards cloud gaming on mobile. Although Turtle Beach is hedging their bets by ensuring the Recon Cloud is compatible with more traditional consoles and PC’s, the inclusion of both native wireless Android compatibility and its own dedicated companion app makes it clear what the intended use is. The additional complimentary month of Xbox Game Pass is also clearly intended to entice potential customers to try the cloud gaming service, although not tying it exclusively to just the Xbox library either.

Given Razer’s entry into the cloud gaming scene with the Razer Edge 5G which also features a complimentary console style controller attachment, and Logitech’s G Cloud mobile gaming device, it’s no surprise that Turtle Beach sees the burgeoning market for AA cloud gaming. Turtle Beach made their name with affordable pro gaming attachments for Xbox consoles and this product indicates that Turtle Beach believes gamers will want an experience as close to console gaming as possible, even on their phones.