Compatible with Android 8.0 and up, and several streaming services, the controller will fit in your pocket. 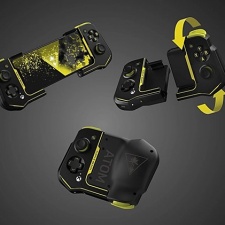 These new Atom Controllers can attach to any Android phone from Android 8.0 up in a magnetic fusion, creating a console-style device designed to still fit in your pocket. They are compatible with Bluetooth 4.2 onward and are due to be made available on 14 November 2022.

Cloud gaming is growing increasingly popular, and having been designed with this in mind, the Atom is compatible with a number of streaming services. These include Xbox Game Pass, Nvidia GeForce Now and Steam Link.

Also looking to meet cloud gaming demands, Blacknut received a strategic investment from Square Enix this summer. BlueStacks, meanwhile, has expanded its platform to encompass over 2 million games across the cloud and Android.

The two-piece design of Turtle Beach’s Atom Controller is not currently compatible with iPhone devices; it is also incompatible with PlayStation, which partnered with fellow games streaming platform Backbone earlier this year for the release of the Backbone One PlayStation Edition, an alternate version of Backbone’s flagship controller attachment. Backbone also announced in April 2022 that Discord had become a partner.

Earlier this week, Turtle Beach also unveiled another Android-based controller, this one in an Xbox style for cloud gaming. It has a complimentary month of Xbox Game Pass included and is known as the Recon Cloud controller.

Turtle Beach’s new Atom Controller, meanwhile, is aesthetically closer to a Nintendo Switch, with thumb sticks, a d-pad, triggers, ABXY buttons and more. Having separate magnetic modules for a person’s left and right hand, a mobile phone can be clamped between the low-latency controllers which use a proprietary 2.4GHz wireless link.

The battery life of the Atom Controller is 20 hours per charge, with total charging time taking approximately 2.5 hours.

Utomik is bringing more than 1,000 games from PC to Android with cloud gaming