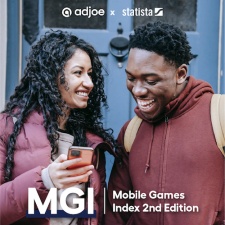 Sarah Vordermeier, content writer at adjoe, explores the findings from the recently released Mobile Games Index, drilling down into key trends across the global mobile market.

Teaming up for the second time, adjoe and Statista have just released their second edition of the Mobile Games Index. Aggregating data from over 10,000 mobile games titles, over 85 million users, five verticals, and five GEOs, the index celebrates the mobile games that most successfully retained their users’ attention, focusing on the all-important metric of daily app usage.

Statista forecasts a 20 percent climb in in-app advertising revenue between now and 2025. So, it’s hardly a surprise that longer gameplay duration – and, by extension, greater ad consumption – will go hand-in-hand as a key growth KPI for developers. Whether developers make it into the index or not, they’ll be able to pit themselves against their direct competition and ideally establish a game plan for how to drive longer and more in-depth sessions from their users.

Africa maneuvers into a mobile-first market

Unlike any other region in the index, Africa saw an uplift in daily app usage across each of the five gaming verticals between 2021 and 2022. The region came out on top in terms of time spent in casual games (at 26 minutes per day) and second for midcore games. Gameplay duration in social casino games increased by 57 percent – the biggest increase of the five gaming verticals since the 2021 index. In fact, only APAC observed a larger growth for this vertical, at an impressive 78 percent. The social casino specialists featured in the rankings, publishers Bagelcode, Huuuge Games, and SpinX Games, once more successfully secured top-five placements in Africa, according to the 2022 index.

Connecting the dots, this expansion in daily app usage in Africa heavily correlates with the region’s improving access to smartphones and faster technology. While smartphone penetration rates in mature markets such as North America and Europe already exceed 75 percent, sub-Saharan Africa is only just entering the mobile-first market now at a rate of around 46 percent. This is expected to creep up to 50 percent by 2025.

There is likewise still a mighty long way to go (and grow) for Africa when it comes to the adoption of 4G and 5G technology. But if mobile connectivity there catches up with the likes of Europe, North America, and APAC, higher-speed technology and higher-quality graphics will positively impact time spent, user engagement, and the all-round user experience for mobile gamers. Especially for hardcore and RPG games, where Africa is lagging relative to the other regions.

Titles with community and connection conquer the index

The peak of the pandemic may be behind us, but before us, there is a host of mobile gamers still hungry for human connection when they play. The index reveals that the titles most successful in achieving longer sessions have been those fostering authentic connections as well as social, immersive, and competitive gaming experiences. This is where multiplayer and RPG games enter the arena. In the index, Summoners War is the only multiplayer RPG game with four number-one placements: in North America, Europe, LATAM, and APAC.

In particular, multiplayer board game titles – within the casual game category – pulled out a strong performance in terms of daily session duration in all regions, spanning between 15 and 26 minutes. Index placements were plentiful among board game titles such as Parchisi STAR Online and Ludo King, which transform gaming into a social experience for global users with their voice chat, leaderboard, live themes, and tournament features. These features boost in-app activity and drive their users further into the game and community of like-minded gamers.

The peak of the pandemic may be behind us, but before us, there is a host of mobile gamers still hungry for human connection when they play

In the midcore category, where Europe and APAC previously dominated the time spent metric, Africa now replaces APAC to join Europe on the podium. Daily app usage for midcore games in Europe and Africa between 2021 and 2022 was 18 minutes and 17.5 minutes, respectively.

The creator environment that is unmistakably unique to midcore gameplay, especially simulation games, drove some of the longest sessions in the Index. Top-ranking titles retained their users’ attention by compelling them to invest their time in building an entirely virtual life, created for themselves. Whether unleashing a user’s inner farmer, architect, fashion designer, or home-dweller, simulation titles require skill and strategy – and time investment.

Life simulation game The Sims FreePlay by EA Games received two placements in the index, while design simulation games such as Home Design Makeover by Storm 8 and Craftsman: Building Craft by StarGame22 impressively brought home four placements. Investigating the rankings further, the index brings to light a promising formula for achieving in-depth gameplay and greater user engagement in the midcore category. By merging multiplayer or meta game elements into simulation titles such as Car Parking Multiplayer, Craftsman: Building Craft, and Gold and Goblins: Idle Merge, users are driven to not only create but also connect, compete, and chat with gamers across the globe. This leads them to subsequently immerse themselves in longer and more engaging gameplay.

You can download the full adjoe Mobile Games index, powered by Statista, here for free.

adjoe is a leading mobile platform developing cutting-edge advertising and monetization solutions that take their app partners’ business to the next level. Their unique ad unit Playtime has made them one of the fastest-growing ad platforms and top-ranking user acquisition sources for app publishers worldwide. Learn more about how adjoe is reshaping the way apps operate their business.

Your platform for light-speed research. Statista is a leading provider of market and consumer data that aggregates data from partnerships and external sources while providing self-sourced content. With over one million statistics and more than 80,000 topics from 170 industries, Statista serves as a reliable starting point for quick and comprehensive research.

Learn more about how Statista can equip you with top-quality data.