Family Guy: The Quest for Stuff... and fighting the desire to spend $430

In-app purchases from the players' perspective 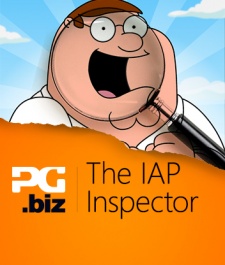 This week, we take a look at TinyCo's free-to-play city builder, Family Guy: The Quest for Stuff.

No doubt eager to match the goldmine that is The Simpsons: Tapped Out, Fox Digital Entertainment and TinyCo have joined forces on Family Guy: The Quest for Stuff - a branded city builder that has players rebuild the damaged town of Quahog from scratch.

On your first login, a brief introductory movie sets the scene for what follows and while we won't spoil the surprise for you, suffice it to say that it involves a fiery cataclysm and a giant chicken.

Right out of the gate, Quest for Stuff positively exudes the trademark Family Guy humour which is - obviously - the major selling point of this title.

After the novelty of the jokes wears off, however, you're faced with a fairly standard city builder that gates progress with wait timers as players try to amass familiar locations and characters from the show.

In theory, there's no end to the fun you can have with Family Guy: The Quest for Stuff - but you'll need a substantial amount of patience or piles of disposable income to get anywhere.

Quest for Stuff takes a forked approach in incentivising its players to convert into paying players.

Firstly, buildings and quests are all gated behind wait timers. If you want to skip the wait, you can shell out a few Clams to complete a quest, action, or building instantly.

While this appears like a standard city building monetisation tactic, it's actually a clever angle for Quest for Stuff to work, however, as the quests do the heavy lifting for the jokes in the game and quick timing is key to make the comedy work.

For example, to complete Quagmire's "I am Legend...In Bed" string of quests, you'll need to build a stripper pole and have Bonnie Swanson twerk on it for four hours to receive 25 coins, 20 XP, and a brief joke from Quagmire.

The quips from characters will certainly please the Family Guy faithful, but four hours seems like a bit of a long wait for a punchline - which is exactly how the hook as to how the humour's imbricated with the incentive to spend on in-app purchases.

Another interesting pressure tactic employed in Quest for Stuff is a buy-one, get-one sale that pops up about thirty minutes into the game.

With two currencies available for purchase - Clams and Coins - players are presented with a tempting offer of getting either $4.99/£2.99 worth of Coins or Claims (1,300 and 130, resp.) in exchange for the other.

While, naturally, both Coins and Clams can be earned through organic gameplay, you'll almost certainly need to spend on both if you want your rebuilt Quahog to look and sound anything like the one on TV.

Uninspired buildings like the Standard Offices and Average Offices cost 200 and 300 coins, resp., and are well within a player's reach starting out.

These buildings generate coins if you remember to tap on them - but they really aren't anything to look at and are, ultimately, two uninspired rectangles rendered vaguely in the Family Guy style.

Featured decorations also run the gamut in terms of Clams, with the cheapest - the Stewie Flower - costing a modest 5 Clams, while the “Golden Peter Statue” retails for 1,000 coins, or roughly $30.00.

Thus, in addition to speeding through the building process, you'll find value in in-app purchases if you to build a town with buildings that you can recognise.

If paying or waiting for humour doesn't sound like your idea of a fun time, Quest for Stuff does not - unfortunately - deliver much else by way of experience.

The majority of the time you'll spend actively engaged with Quest for Stuff will be spent tapping on buildings to generate and then harvest coins and experience points.

Unlike many other city builders / sims out there, your buildings will not generate extra income if you let them sit idle for a few hours. Instead, you'll need to tap on them ever couple of minutes to generate the same sum of coins.

This is a clever way to keep players in the app, and time spent engaged with Quest for Stuff is entertaining at first - but the animations of both the characters and decorations weren't enough to keep me engaged for long.

Unlike The Simpsons: Tapped Out which has all manner of animated set pieces and characters ranging about its large map, Quest for Stuff presents you with a relatively small map and short animations that rarely venture past their starting area and ultimately feel unsatisfying.

Still, the clever satire of the in-game FaceSpace social network - which each character updates as they level up - might be enough to keep fans hooked.

The first point in favour of the in-app purchases in Family Guy: The Quest for Stuff is that they’re all, for the most part, openly branded. If you pay for an item or building, it will be something you recognise from the show

The second point in their favour is that they are all persistent, despite the consumable nature of the currency required to purchase them.

Thus, if you're tempted into spending on the Golden Peter Statue to serve as the centerpiece of your town, it will be there every time to long in to Quest For Stuff. As will the Stewie Dictator Statue, which costs 150,000 coins - or, roughly, $430.00 (and that one's not even animated).

Players who love the Family Guy brand might feel tempted into dropping a few dollars into Quest for Stuff, but ultimately the game monetizes a bit too aggressively for casual purchases to lead to any appreciable progress.

Unlike other branded games which have been inspected here, Family Guy: The Quest for Stuff doesn't offer much for free to lure players in and quickly gates their time and enjoyment as its main source of monetisation.

As such, Family Guy: The Quest for Stuff requires an immense investment of patience or disposable income if it's to compete with the Family Guy clips players can easily watch on YouTube for free.

Holding on too long for a hero: the monetisation of Marvel Avengers Academy