Tamatem CEO Hussam Hammo on the challenges and opportunities in MENA 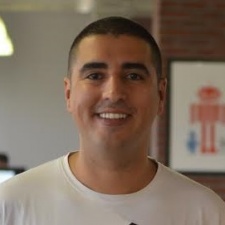 Arabic is the fourth most spoken language in the world, yet less than 1% of all online content is available in Arabic.

It's an arresting statistic, and Tamatem CEO Hussam Hammo suggests that the percentage is even lower when talking specifically about mobile apps.

Founded in Jordan in January 2014, it's launched more than 40 games and racked up over 37 million downloads.

“If you search for the word 'game' on the App Store, you will get maybe 400,000 results,” Hammo tells PocketGamer.biz.

“But if you search the same word but in Arabic, you will get less than 1,000 results. This shows the huge gap in the market.”

Tamatem's goal is twofold, then: to bring millions of mobile gamers content they can enjoy in their native language and to help developers to make the most of the market's sheer size and potential.

“I don't pitch to them Tamatem as a gaming company, I pitch to them the market,” says Hammo. “It's a tough job, because I am holding the whole market on my shoulders and going to sell it.

“People don't understand the market, it's a black box. And the Middle East is always wrapped in the idea that it's a war zone, people are afraid of it, we can't do business there. Of course, it's not the case.”

Saudi Arabia has the highest average revenue per paying user in the entire world.

The best selling point for the region to international developers - and the country where 70% of Tamatem's users are based - is Saudi Arabia.

A wealthy country in which the penetration of high-end smartphones is high, Hammo explains that its unique environment is a breeding ground for high-spending mobile gamers.

“We tell [developers] that there are 100 million Arabic smartphone users living in the Middle East, with a country like Saudi Arabia that has the highest average revenue per paying user in the entire world,” he states.

“The main reason why Saudis are insane when it comes to ARPPU is because there is a lot of time and a lot of money, and absolutely nothing to spend the time or money on in Saudi Arabia, besides playing games on your phone.”

From China to the Middle East

The China parallel is an interesting one, as for years that has been the market seen as the high-spending holy grail for mobile games developers.

But with incredibly tough competition and ever-stricter regulations, Hammo believes that China is becoming less attractive.

“The Chinese developers are trying to escape China, and do you know where they are going? They are going to the Middle East,” he says.

“If you look at the Saudi market, the top-grossing game on iOS is a Chinese game fully localised to Arabic. It's a complete replica of Game of War - a rip-off - but it is much better and nicer than the original game.”

Hammo adds that said game generates $6 million per month from the region, and has been top grossing for a year - a glimpse at the opportunity in Saudi Arabia.

Of course, there are plenty of challenges too. Saudi Arabia is a country of many cultural nuances, and Tamatem has to be accommodating of this in its culturalisation.

For religious reasons, music that involves instruments is restricted in Saudi Arabia.

However, in Saudi Arabia there is a street racing scene that largely involves more everyday, modest vehicles - and so to reflect this, they were added for Tamatem's culturalised release.

Another example is that, for religious reasons, music that involves instruments is restricted in Saudi Arabia.

Tamatem's solution is to make in-game music using “sounds made by humans rather than instruments,” Hammo explains. “And for them, this is accepted - although at the end of the day, it is the same result.”

To make the most of its knowledge of the Middle Eastern market and culture, Tamatem also owns two development studios - in Amman, Jordan and Cairo, Egypt.

“The reason we are not 100% focused on publishing is that these teams will be able to create games that you will not find anywhere else,” considers Hammo.

“A very specific type of drifting in Saudi Arabia, or a very local card game - for that, you need to have someone who can develop such a title for you and launch it in the region.”

This local knowledge is what gives Tamatem the edge in the Arabic-speaking market, but Hammo identifies a growing interest in the region from major Western companies.

“Supercell came to visit our office a month and a half ago,” he reveals. “They are number one everywhere, but not in Saudi Arabia and other countries in the region. They want local help to find ways around that.

“Zynga is also interested and we almost had a deal with Rovio to distribute in the region.

“Everyone is trying to look at this region, but everyone is also putting this region last. They are looking at the US market first, China, Western Europe, they are now looking at Latin America - and then, after they finish everything, they will start to look at the Arabic market.”

But with a Chinese game topping the Saudi grossing charts, and Tamatem itself set to publish a Chinese-developed mobile MMORPG in the MENA region, Hammo believes that Chinese developers have been among the first to note the opportunity in the region.

“What they understood, the Chinese, is that the market has a lot of potential,” he says.

“There is no competition in the market, it's easier and cheaper to acquire users, and the users actually pay a lot of money.”

But is Hammo concerned that if developers from overseas start muscling in on this, Tamatem will suffer? Not at all.

“It will set a new bar that you are competing with,” he asserts. “That would actually make us better.”