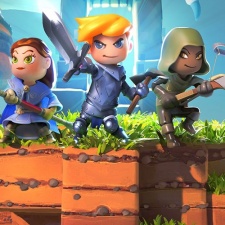 Under the terms of the deal, 505 Games will retain a 50% royalty and will also receive a licensing fee.

Duoyi will also development a new version of the game that both firms will distribute in China and the rest of the world.

Portal Knights, developed by Keen Games andcurrently in Steam Early Access, is set for a May 2017 release in European and American markets. The localised China version of the title is expected to launch in the summer.

Previously the game had been announced for PC and console releases. It's not clear whether the mobile version will be exclusive to China or if that will also be launched globally. We've reached out for clarification on the matter.

Duoyi is a Chinese publisher that is said to have achieved a 30% average compound annual growth rate in revenue for five consecutive years.

As well as publishing mobile titles, the company operates in other sectors such as PC games, email services and instant messaging software. It currently employs some 1,800 staff.