The analysis of a lifetime 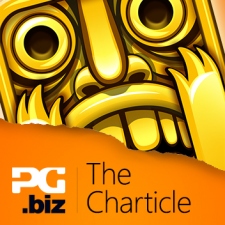 If we proffered the words "fun, addictive, mobile endless runner", we'd be willing to wager a considerable amount of cash that the majority of folk would instantly think of the Temple Run  franchise.

The simplicity and immediacy of the series is arguably a big a reason as to why the Temple Run  games have been so successful and, having been on the market since 2011 in some regions, Imangi has just announced that collectively Temple Run  and Temple Run 2  have surpassed 1 billion downloads.

Logical, then, that this week's Charticle  be taking a look at the download history of the Temple Run  titles to see where those 1 billion downloads came from.

Temple Run - the game that started it all - has been raking in downloads for the majority of its long life.

Since then it has lost its place as a series regular, though did manage to creep back into the top 100 in 2014 in the US and Europe.

Temple Run  only made its debut on the Google Play store in March 2012, however that doesn't mean it hasn't made a significant contribution in terms of downloads.

Despite starting later than its iOS counterpart, Temple Run  found more constancy on Google Play, especially in the US and Europe where is has been a permanent member of the top 100 since launch.

In Asia, Temple Run  struggled to replicate its Western performance and the game went off the map in April 2013 after spending a few months inside the top 50.

As you'd expect, Temple Run 2  has also played a significant part in reaching the 1 billion mark.

Since it hit the App Store in January 2013, the sequel has proven to be every bit as addictive as its predecessor.

The game has become a well known face on the download charts, where it flutters around the top 100, often climbing and falling, but rarely dropping out altogether.

Unfortunately, the Asian territories have proven to be the chink in Temple Run 2's  armour, as Imangi's sequel was unable to worm its way into the hearts and minds of mobile gamers in the East, where it only ever flirts with the top 100.

Consistency is once again the name of the game on the Google Play download charts.

In the US and Europe Temple Run 2  has settled down inside of the top 100, and while its performance in some European territories can be slightly erratic, in the US the infinite runner has spent the majority of its life inside of the top 50, and top 20.

On the Asian download charts the game couldn't outshine its iOS cousin. Instead, it's performance in the East is just as frustrating, and despite Temple Run 2's  brief stints inside of the top 100, it lacks any real permanency.