How a Plants vs. Zombies producer and a former NFL team tech lead are shaking up idle games 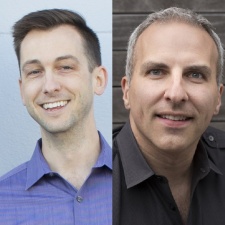 When Plants vs. Zombies came to iPhone in 2010, it was an important moment for mobile gaming.

PopCap Games’ incongruous mash-up of gardening and undead-slaying had already been a hit on PC and Mac in 2009, providing a shot in the arm for the tower defense genre, but it was on the burgeoning mobile platform that it really felt significant.

Ben Ahroni (pictured main, right), then of PopCap, played a crucial role in Plants vs. Zombies’ transition to mobile in his role as producer.

He oversaw its incredibly successful launch - then the highest-grossing in App Store history - with Plants vs. Zombies going on to become not only a popular game, but a huge multi-platform brand.

Of course, much has changed in the mobile space since then. The premium model then used by Plants vs. Zombies and the vast majority of its mobile competitors has largely made way for free-to-play, while the size of the market has only grown and grown.

With the free-to-play age, we’ve seen major changes – particularly in the casual space – in the kinds of experiences that players demand.

And with the free-to-play age, we’ve seen major changes – particularly in the casual space – in the kinds of experiences that players demand.

One of the genres born into this age of free-to-play is the idle game (also sometimes known as clickers or incremental games) in which the player makes progress through simple taps and smart automation, always optimising to allow for greater rewards from less time and effort expended.

The genre’s explosion fascinated Ahroni, who had enjoyed a stint with the gamified brain training platform Lumosity after leaving PopCap, particularly due to the deeply mathematical aspect of idle game design.

And so, on the lookout for a new challenge in 2016, he decided to start a new mobile games studio to firmly put its stamp on idle gaming.

Ahroni couldn’t achieve his ambitions alone and wanted to co-found the company alongside someone who shared his passions. Joe Trdinich (pictured main, left) was a software engineer who had taken a very different career path than Ben Ahroni’s, having zero games industry experience.

But Trdinich, a former classmate of Ahroni’s from their time studying computer science at Carnegie Mellon University, had worked in high-level software engineering roles at Microsoft and Yahoo - and even had a spell as the director of technology for the NFL team the San Francisco 49ers!

More importantly, he shared Ahroni’s passion for the design and mathematics behind idle games, and the pair’s vision for the genre was aligned. MeeWow Games was born, remaining as a duo for a while before visual director Alex Madrigal and product designer Zebulon Reynolds joined the team.

Being a small team, it was a case of all hands on deck. Trdinich quickly turned his hand to Unity, learning game development from scratch in the process, and the game that would become the just-launched Tap Empire began to take shape.

From their perspective as enthusiastic idle game fans, the MeeWow Games team was well-positioned to observe and counter its frustrations with the genre.

MeeWow Games team was well-positioned to observe and counter its frustrations with the genre.

For instance, Tap Empire has a saga map and bite-sized levels – an aspect of highly successful casual game design that has rarely been effectively blended with idle game mechanics.

It also features a light and humorous narrative – story being another area where idle games are traditionally weak – in which the player teams up with a genius inventor and a bling-obsessed pig to overthrow the evil business baron Mr. Bossworth, liberating his army of overworked robots in the process.

But perhaps most significantly, in Tap Empire players can continue earning money across multiple areas at the same time – and even across multiple distinct universes as part of special timed events – with no sacrificing of progress required at any stage.

Those familiar with idle games will understand why this is significant. Usually, it goes something like this: the player earns a certain amount of currency, or upgrades to a certain degree, at which point they must give it all up in order to level up and begin the process anew.

In Tap Empire, that pain point is eliminated.

Launched on October 11th in partnership with Flaregames, a publisher with its own history in the idle game genre with Nonstop Knight and Nonstop Chuck Norris, Tap Empire is now available worldwide on the App Store and Google Play.

For Ahroni, Trdinich and the whole MeeWow Games team, it’s been incredibly gratifying to see their vision finally realised. They tackled their mission head-on, setting out to create an idle game for everyone and can now be satisfied that they achieved that goal.

You can download Tap Empire for free on the App Store and Google Play here.