Can King transition the loveable marsupial over to mobile right? 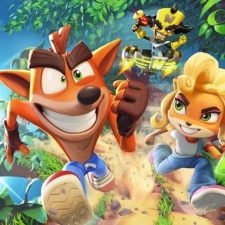 It's wild to think that Crash Bandicoot has been 'wumping' crates for nearly 25 years.

Starting out under the now heavily-revered Naughty Dog studio - best known for the Uncharted and Last of Us series - the marsupial enjoyed three strongly received outings on the PlayStation. Then, following a period of mixed experiences acting as a third-party, Crash returned to his former glory with Crash N'Sane Trilogy in 2017.

10 million sales later and riding high off the success, Crash will now return to consoles with Crash 4: It's About Time, as well as his first mobile outing in over a decade courtesy of Crash Bandicoot: On the Run. Once rumours and leaked footage started to materialise online, it was hardly shocking to see the once Sony mascot make his transition to an endless runner. It was more shocking that it took so long to actually make happen.

Taking the reigns will be Candy Crush developer King, a company who traditionally specialises in match-three puzzlers and quintessentially knows how to make a product successful on the mobile platform. While its style of games has never really spoken to me personally, I am interested to see the studio's execution of the Crash license.

It's hard to deny that when King does launch a new title, it has to hit a certain level of polish. Straight away, On the Run looks to hold true to that testament. The early trailer and soft-launched gameplay seem promising, from the animation to the music to the personality - which makes up such a large part of what Crash is all about - has me excited. However, bigger than that is the feeling.

Anyone that has dabbled with the original Crash trilogy and more recent remakes will tell you that there's a specific feeling to Crash games. There's a tightness to the platforming, a fluidity to the controls, a secret sauce that goes into the level design to make sure that when a new element is introduced it never outstays its welcome.

This is difficult to perfect in an endless runner. It may even be more overshadowed by monetary gimmicks and time limiters, something that is always a worry when a popular IP crosses over to mobile.

There's clearly anticipation too. At the time of writing, the official trailer uploaded by King has over 3.6 million views and 1100 upvotes to 170 downvotes. For a beloved property making the switch to mobile, this is a rare occurrence. Potentially, it was the knowledge that a fully-fledged triple-A Crash game will launch shortly after which helped keep fans happy.

For instance, Diablo Immortal infamously went down like a lead balloon with many fans expecting a new mainline iteration. Activision Blizzard's (King's owners) announcement was loudly criticised across the web and was downvoted approximately 760,000 times via its debut trailer.

If a new Diable game was revealed alongside the mobile entry, then the story could possibly have been different altogether. This is something that Activision/King seemingly has learnt and is looking not to make the same mistake twice.

While this is Crash's first mobile outing that's been built from the ground up for the platform, it's worth noting that there were a couple of racing titles from Vivendi Games. Crash Bandicoot Nitro Kart 3D and Nitro Kart 2 launched across iOS, Symbian, N-Gage, and Zeebo, showing the age of these products.

On console, the kart franchise is equally one that Crash has triumphed at. Arguably giving a certain athletic plumber a run for his coins, 2019's Crash Team Racing: Nitro-Fueled pulled in the best launch in the franchise's history meaning that there's clearly room for a mobile kart racer starring the character too.

With a launch likely only a few months away at max, Crash Bandicoot: On the Run needs to come out swinging. Possessing such a large fan base that historically only settles for the pure Crash experience means that King won't have time to experiment or blunder the monetisation and/or time limiters. It's a difficult balance, yet one that can heavily reward with plenty of Wumpa fruit if done right.