PocketGamer.biz's Games of the Year 2020

Danielle, Kayleigh and Matthew reflect on a huge year in games 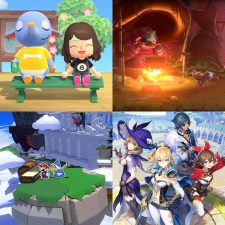 It's been a heck of a year, and it's safe to say that video games have gotten us through a handful of hard times during it.

While we're (mostly) all about the serious business at PocketGamer.biz, that doesn't stop us from getting hands-on with all the latest releases across iOS, Android and Switch. It's been a massive year for all three of these platforms with some stellar releases and achievements.

So as a last bit of fun for the year while we're wrapping up financials, analysis and all of the traditional insight we specialise in, the team here thought we'd share our favourite mobile and Switch games of the year. These are just our personal picks and trust me, we'd love to do more than two games each.

Read on, dip back into some of the finest games from this year, and we hope we can spark a little inspiration as we prepare to close out 2020.

Mobile Game of the Year - The Last Campfire

The turnaround that Hello Games has exhibited in the last four years has been one of my all-time favourite industry developments. From the turbulent trash fire that was the No Man's Sky Launch, to snagging a Game Award for said title in its new state. In September 2020, the company boldly dropped an Apple Arcade exclusive, a strong pivot away from the open-world console epics that HG had become very known for.

The Last Campfire is a hearty puzzle game with a traditional yet comforting guideline. You wake up in a cave with no idea what's going on, a weight on your tiny shoulders to save lots of lives, and a fierce regal animal that does not want you to do that. You, a little dude in a snuggie, must traverse a gorgeous landscape, solve puzzles and restore hope to this cute kingdom.

While the game is now available on other platforms, Hello Games' Sean Murray was adamant to express that the game is built for mobile, and it shines as a mobile title. Each level feels refreshing as you enter, and not just a repeat of the last with extra steps. While its core mechanics are mobile-first, it's design and scope go far beyond.

The Last Campfire dashes multiple expectations of what a mobile title should be. It's charming, handles like a dream, and is entirely demonstrative of why we take pocket games so darn seriously.

Honourable mentions: Marvel: Clash of Champions (2015, but I can't put it down)

An obvious one, but a game a lot of us needed this year.

Animal Crossing: New Horizons is the first proper installment that the series has had since 2015, and the first console version since the 2008 Wii release. AC:NH saw old fans and new fans alike hop back into the digital bliss of... getting a really expensive mortgage. Stay with me.

The game sees you jet off to a desert island with familiar, fuzzy functionary Tom Nook, and he offers you the chance to build a new life on said island. Over time, you'll slowly build up your island, decorate it however you wish, amass a group of anthropomorphic island mates that never contribute to the upkeep, and so on.

Logging into my island helped me stay in a routine when every other part of 2020 felt so chaotic, and it still does today. I treat it like a mobile game - I pop on with my morning cuppa, check the shops, do a lap of my island to water the flowers and chat to the neighbours, and I'm away.

Animal Crossing came out precisely when we (and I) needed it. It's a comfortable haven that doesn't require too much energy if you treat it right, and a perfect, peaceful distraction, if just for a moment. I have also stopped paying my digital mortgage, which helps.

As the lines become more blurred between what is actually mobile and what isn't - thanks to the launch of more streaming services such as xCloud, Nvidia GeForce Now and Google Stadia - it's hard to deny that 2020 has been anything but a tremendous year for the platform.

Once again, Pokemon GO went against all odds and managed to adapt under the global lockdown to still create an engaging and rewarding virtual adventure, which culminated in the title achieving its best year to date. Genshin Impact stormed the web, showing that a game like Breath of the Wild can be made possible on mobile, while Apple Arcade continued to provide exciting experiences, such as The Pathless, Beyond a Steel Sky and Warp Drive.

When it comes to my personal pick, I'm opting for Trivia Royale from Teatime Games. The trivia titled turned battle royale sticks in my mind as some of the most fun I've had on mobile this year for a plenitude of reasons.

Namely, the competitive drive to become number one in my home city for the video games and superhero categories. It's one I succumbed to and spent a good number of evenings facing off against friends all while trying to make my way up the ranks. It's quick, it's simple and it's something I expect to continue playing.

Switch Game of the Year - Paper Mario: The Origami King

Nintendo's had an interesting year. If you aren't a fan of Animal Crossing, the company left you high and dry for the first half of the year. Thankfully, I adored the island getaway experience and spent the first month or so playing every evening with my partner. My goal of recreating Gotham City kept me intrigued for weeks but after 140 hours of playtime, I quickly fell off and don't really have any intention of returning.

My backlog is shameful with Pikmin 3, Hades and Hyrule Warriors: Age of Calamity all waiting in the wings for me to dive in. That said, Paper Mario: The Origami King was a charming outing that delivered in many ways. As a long-term fan of the series, it was fantastic to see the game return to form, alongside genuinely throwing up some memorable and downright gut-wrenching moments - something you rarely see in a Mario game.

It's also worth mentioning the comedic writing that has excelled in every entry (excluding Sticker Star). Comedy is hard, so to have a game that constantly had me in stitches and pausing to regain my focus is a testament to the team at Intelligent Systems. Throw in the ridiculously colourful aesthetic, the wonderfully creative boss battles and Paper Mario: The Origami King celebrated the series' 20th anniversary in style.

To say 2020 was a fantastic year for mobile games would be an understatement. However, there is one that stood out above the rest for me, one that hit the ground running.

I am, of course, talking about Genshin Impact, the open-world RPG that clearly took a lot of inspiration from Breath of the Wild, and it shows. It doesn't take a lot to interest me. I will try pretty much anything.

However, if it is an RPG, then my attention is cemented. Genshin Impact didn't have to try very hard; it just clicked with me, as it did with many players worldwide. The world itself was breathtaking. It looked just as good on mobile as it did on PC or PS4.

MiHoYo created a stunning environment that is just begging to be explored, and that was before I was really even aware of the story or what my objective actually was.

Furthermore, not only could I take Genshin Impact on the go with me, but I could also boot it up on my PS4 when I got home - picking up exactly where I left off on my mobile device. Speaking of multiple platforms, the mobile rendition features adequate controls that hold their own against console and PC.

Honestly, it would be tough for me not to pick an RPG as my Game of the Year. It is my favourite genre, after all. However, Genshin Impact made it so easy for me to select it. The leveling up system was great, weapon choices were on point, and frankly, I just loved the openness around me.

Oh, and if there is one thing that I find most mobile games to be missing, it is a stunning soundtrack. You see, I am a sucker for good music, and my god does Genshin offer it to me on a silver platter. Finally, any game that allows me to pass myself off as a decent chef is a winner in my book.

Just like with mobile, the Nintendo Switch has had a big year when it comes to games. Animal Crossing: New Horizons or Mario would perhaps be the obvious choices from Game of the Year. Actually, Hades could be added to this list too.

However, I have a different entry, one that could rival any of the aforementioned titles in a variety of ways.

Honestly, I am struggling to find the words that best describe Ori. It is beautiful in every sense of the word, from its visuals to its soundtrack and ultimately the story.

The game plays well on the Switch. Fortunately, it is not a title that has been ported with performance issues. The platform-adventure hit is well suited to Nintendo's console, if only for the fact that the adorable guardian spirit can go wherever you go.

Besides looking and sounding incredible, Ori and the Will of the Wisps feels great thanks to excellent gameplay and controls. It all felt so smooth. It was easy to get addicted to this little gem for so many reasons.

Ori and the Will of the Wisps sees players climb, run, jump, glide and swim between platforms, as they attempt to solve the puzzles that stand in the way of the white guardian spirit. The mixture in motions adds a bit of freshness to the game.

Moreover, as the game progresses, Ori will unlock new abilities that will allow the player to reach places that they couldn't before. If you happen to be a fan of Rayman, then perhaps you will recognise various elements. It is clear to see where some of the inspiration for the title came from.

Finally, I cannot forget the emotions that the game forced me to feel. Honestly, I went through the motions on this adventure.