Fall Guys and Monster Hunter Rise have the highest per cent of growth in streamers on Twitch and Youtube Gaming respectively, according to data from StreamElements and Rainmaker.gg 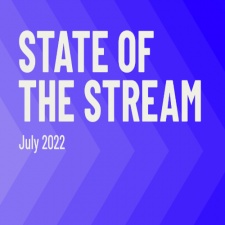 State of the Stream from StreamElements and Rainmaker.gg reported that the hours watched on Twitch grew by 2 per cent. YouTube Gaming grew by 0.7 per cent, while Facebook Gaming dropped by 0.2 per cent.

The report also revealed the performances of the top 10 games streamed on Twitch and Youtube Gaming.

Although Just Chatting and League of Legends stood on top as first and second place on Twitch's top 10 charts respectively, they didn't reach the same heights as they previously had. Counter-Strike: Global Offensive also witnessed a noticeable decline, dropping by 10 per cent.

Valorant and Minecraft on the other hand saw a 16 and 29 per cent increase in viewership respectively, reaching 110 and 48 million watch hours.

The most noticeable growth in viewership on Twitch was Fall Guys, soaring from 20th place on Twitch's top 50 charts by the end of June to 10th place by the end of July, reaching over 42 million watch hours last month, which was a 131 per cent growth. This momentum can be contributed heavily to Fall Guys making the change to a free for all platform.

On Youtube Gaming's top 10 charts, Monster Hunter Rise saw a significant 137 per cent rise in watch hours after it received a major title update on June 30th. After this update, the title went from 3.4 million to 8.5 million hours watched after.

Titles like Minecraft stood mighty on top with 24 million hours watched, a significant increase of 45 per cent.

Earlier this month, Data and analytics provider Stream Hatchet published its quarterly report showing that Twitch remains the biggest platform in terms of live streams, with 68 per cent of the market share, while YouTube sits in second place at 14 per cent.

Partnerships like the one Google Play made with PUBG Mobile to give PUBG Mobile players a three-month free trial of Youtube Premium have kept Youtube as Twitch's number one competitor.

Meanwhile, Facebook Gaming was able to clench the Pac-Man Community as an exclusive back in May.