The Middle East has all the ingredients for the perfect gaming boom, with esports and web3 part of the region's growth 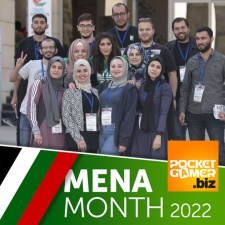 The MENA region has gained a reputation as a booming area for both marketing and development of mobile games, as well as immense popularity by the region’s gamers. While the boom is underway, with 2021 gaming revenues reaching $1.76 billion, immense opportunities still exist: That number is expected to exceed $5 billion by 2025, as we reportedrecently.

A number of countries make up the diverse region, and you will find features here on PocketGamer.biz all month highlighting the challenges and opportunities in individual territories, starting with Saudi Arabia. But it's worth considering some statistics about the whole market.

The year 2021 was truly a banner year for games in MENA, with downloads growing to 4.9 billion, nine times the global growth rate. In addition, consumer spend surpassed $1.6 billion, three times faster than in the rest of the world. In 2021, there were 65.3 million gamers in MENA, a number that’s expected to rise to 85.7 million in 2025.

MENA is a region without a firm or agreed definition. But for the purposes of our feature articles and our upcoming Top 30 companies list, we’re considering numerous countries, including but not limited to, Jordan, Saudi Arabia, the United Arab Emirates/Dubai, Bahrain, Iran and Lebanon, as well as Egypt and the North African countries across to Morocco. (Markets such as Israel and Turkey are, of course, of interest, though those are places with games sectors already covered extensively and remain distinct from other nearby territories.)

The big story in MENA gaming is told by demographics. The total population of the region is around 400 million, and almost half are under 25. Having grown up as digital natives, this young generation eagerly embraces what’s new in apps and gaming, especially via their mobile devices. In 2021, app downloads were 53% higher than in 2019, with consumer in-app spending more than doubling in that timeframe.

Make sure your game is not just translated but truly localized culturally. The player needs to feel it was created by native speakers

Although some MENA countries speak French, and English is also common, Arabic is the dominant language. When we spoke to the CEO of publisher Tamatem, Hussam Hammo, in 2019, he reminded us that, “Arabic is the fourth most spoken language in the world, yet less than one per cent of all content available online is in Arabic… More than 70 per cent of the population of the Arabic speaking countries – around 400 million – use Arabic as their default language on their smartphones. Add to that that countries like Saudi Arabia have the highest ARPPU in the entire world, and you have a perfect opportunity.”

The MENA region has a well-earned reputation as a hub for game development, and also as a market for games, one capable of delivering astounding results for games that catch on with users. In 2014, Ali Alharbi was still an independent developer, but that year he released Climbing Sand Dune. Within 12 hours, it was the number-one requested title on both the Apple and Android app stores.

Climbing Sand Dune remains a popular title today, and Alharbi has maintained his independence, as CEO of UMX Studios, a game company based in Riyadh with an additional office in India. “In 2022, we’ll reach over one billion impressions and 55 million downloads on both Apple and Google for our two racing games,” Alharbi says proudly.

Alharbi has two pieces of advice for those wishing to enter the MENA gaming market: “First, build multiplayer and social capabilities into your games. This is an important part of the success here. Second, if you are releasing an Arabic version of an already existing game, make sure your game is not just translated but truly localized culturally. The player needs to feel that the game was created by native speakers.”

The market is opening up to NFTs. Established names are setting up play-to-earn tournaments and pushing next-generation web development

Looking forward, Alharbi is bullish on the prospects for the MENA gaming industry. “Investment in the region is growing at a massive rate, and gaming is achieving acceptance and support from governments here,” Alharbi says. “I believe those who join this story now will fly to the stars on their success.”

The under-25 group helps drive the tremendous popularity of esports in MENA. The market is attracting major international players: Earlier this year, Riot Games, Tencent, Intel, and Ubisoft jointly announced that this year’s expanded Intel Arabian Cup – their third esports tournament collaboration in the Middle East – will offer a prize pool of $130,000. Newzoo forecasts a compound annual growth rate for esports of 15.1% through 2024, compared with 10% globally (courtesy Wired).

MENA’s gaming market is also opening up to the world of NFTs and cryptocurrency. Established names in gaming, such as Crypto Gaming United and Vorto Gaming, are setting up play-to-earn tournaments and using their presence in the region to push blockchain, NFT, DeFi, DAO, fintech, crypto mining, and next-generation web development.

Fresh topics such as web3 and blockchain join established subjects like esports, advertising and growth strategies at Pocket Gamer Connects Jordan in Amman next month. Tickets are still available. And we encourage CEOs, directors and decision-makers to meet at the Leaders Summit in Riyadh at the end of November to share insights into international opportunities.