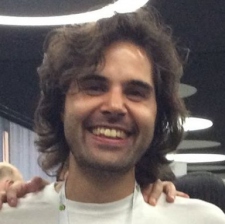 The investors on this side of the world are starting to see the mobile gaming potential and so they are betting on it.

The fact that Miniclip is based here and our ambition to succeed with a strategy plan, helped this to happen.

Also, the long awaited jump of Nintendo to mobile and the announcement of the Hololens development kit was significant as well.

We had been building new gaming IPs with great characters and narrative arcs, but we needed to shift our focus towards the development of tools so we can have faster production cycles for our next games, and also to build up our analytic system.

I'm confident that we will see new, creative UA campaigns.

More than make a game, we need to build a gaming studio.

VR will kick in and space opera will be everywhere, from Star Wars to Star Trek!

At least we are looking to make some bold moves on that subject.

What a weird question for a developer. Simple! Our game Smash Time - the best smasher on the planet since the dawn of time!

Besides that, I got totally addicted to Unlimited Spiderman. Amazing production value and one of the few on mobile that had my jaw dropping all the time.

We are building and throwing games like razors. Shouldn't someone be tracking all of the game content out there?

So many games, good and bad, that are getting lost and without any record. It would be nice to see a database with all of them.