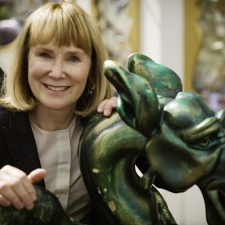 While separated by almost the entirety of the United States, developers Legacy and HitPoint Studios have worked in collaboration for some four years.

The former is based on the Pacific coast in LA, where it crafts casual retail titles for Walmart, as well as mobile games that typically carry a licensed IP. The latter, meanwhile, calls Greenfield, Massachusetts home, positioning it at the north of the vast nation's Eastern seaboard.

HitPoint has long been a thriving work-for-hire outfit. But increasingly, it has become a specialist in augmented reality projects.

Their development partnership has worked well enough that now three of Legacy's senior team will join HitPoint. The most significant of that trio is most likely Legacy's founder and CEO, Ariella Lehrer, who now stands as HitPoint's President.

"Legacy and HitPoint worked on three projects together – two of them with AR – each one a little larger in scope and complexity," says Lehrer of her increasing admiration for HitPoint.

"I was able to see how their team dealt with difficult design and engineering issues, and still be on time and on budget. It was impressive."

And, as it happened, HitPoint were doing well enough that some extra help was appreciated.

It's important not to pursue everything in front of you but, rather, to develop a focus with sufficient ROI in which you can excel.

"He was looking for help with business development, which is my primary role at HitPoint. Plus, HitPoint’s staff was very busy executing on existing projects, and they needed help responding to new business opportunities that required creative, innovative ideas for unique user experiences. "

As such, Lehrer was joined by two former Legacy employees, Creative Director Andrew Duncan and Production Specialist Patrick Lee, who all migrated to HitPoint. And Lehrer has high hopes for supporting HitPoint's drive forward.

"Another area in which I hope to help HitPoint is with business strategy," she explains.

"As is true for many small companies with multiple opportunities, it is important not to pursue everything in front of you but, rather, to develop a focus with sufficient ROI in which you can excel and be better than the competition.

"It’s not always easy or obvious how those decisions play out, but I hope to provide some of that business discipline going forward."

Lehrer also appears to bring something less easily defined by her previous experience or familiarity with the business of the games industry: a clear passion for AR. Indeed, her expectations for the future are filled with enthusiasm and optimism.

"I am one of those people who believe in the inevitability of AR becoming the primary way we interact with the physical world," Lehrer offers.

"Sometime ago I listened to a podcast with Peter Diamandis. He was advising a young entrepreneur to think about how her business could scale, if she figured out how to digitise her business model and processes. He forcefully made the point that everything is becoming digital.

"The implications of our physical world inside and outside becoming digital is why I believe AR has such enormous potential. How will everything change, when our phones – and eventually glasses – understand where every object is in our environment, and more importantly, what it is and how it can be used? The applications are endless."

I don’t believe that a small indie developer like HitPoint should attempt to replicate the success of Pokemon.

Of course, if you were to ask the layperson to explain what AR is, they may well mention Pokemon GO. After all, San Francisco outfit Niantic's AR monster hunter was a global sensation, and bona fide cultural phenomenon.

But it hasn't yet enjoyed a comparable follow up success, from Niantic or elsewhere. Strangely enough, that's not exactly the market opportunity HitPoint is immediately targeting.

"This may sound a bit odd since HitPoint has released an AR game for Tango, ARKit, and soon ARCore, but I don’t believe that a small indie developer like HitPoint should attempt to replicate the success of Pokemon," reveals Lehrer.

"Nor do I believe that the success of Pokemon is primarily due to AR. As a result, we are focusing on other types of AR applications, like retail, industrial training and education, where we think the potential is huge and we can make the largest contribution."

Yet, for all that future gazing and optimism, Lehrer still has a hand in at Legacy, where the team continues to make a success from an increasingly 'retro' gaming format; the humble CD-ROM.

"It takes very little management on my part and will continue as long as Walmart is successful. Meanwhile, I was looking for what I wanted to do as the next act in my career. The opportunities of AR beckoned me; it was obvious that I needed to align myself with a team that had great technology and could evolve as the industry did.

"I have the skills and experience that HitPoint needs, and HitPoint provides an amazing platform from which the team can take advantage of the huge opportunities ahead."

That blend of enthusiasm and confidence is likely to serve HitPoint well, and the studio, Lehrer insists, is writing a story that is "only just beginning".

It may not be a tale filled with any hidden monsters, but it's a tale intent on documenting a new legacy.