“I think it’s nice for the kind of people I'm going after, people who are not hardcore gamers but actually play a lot of games in their lives, but don’t think of themselves like that” 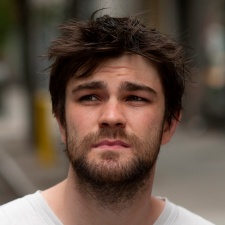 While Zach Gage may be known to most as a games developer, the New Yorker came to the medium through fine arts.

Just some of his artistic endeavours include sculpting and photography. More specifically it is stylised as conceptual art, which means that concepts and ideas take precedence over traditional aesthetic, technical and material concerns.

The games he crafts on the other hand tend to take old vintage favourites, such as chess and poker, and give them life anew by adding modern yet straightforward twists. Really Bad Chess randomises the player's chess pieces while Sage Solitaire combines the luck of Klondike with the depth of Poker.

While experience in creating alluring visuals helped Gage find a foothold in the indie scene, it was the vivid spirit of artistry found in reinventing old bar games that kept him there. That, and the attraction of bringing them to non-traditional gamers.

“I discovered that specific set of experiences was helpful in terms of designing games that were comfortable to interact with and that could convince people who may not necessarily be interested in playing video games that these things were friendly and enjoyable,” Gage tells PocketGamer.Biz.

“That paired with my enjoyment of exploring these old style contexts, like cards, pool, words or newspaper games, led to this weird career of exploring these overlooked or old conventional games and bringing them into the video games space by making them accessible.”

To build something I considered to be real rubbish that a friend of mine thought was brilliant was hard to wrap my mind around.

However, Gage’s unique approach to exploring games in this way came about almost by accident. When working on a prototype of SpellTower he “thought the prototype really sucked,” but was encouraged to continue by a friend who was fond of word games.

“That was a really weird experience for me,” said Gage. “Because when you’re making things you think you have a pretty keen sense of what is good and what isn’t. So to build something that I considered to be real rubbish that a friend of mine thought was brilliant was hard to wrap my mind around.

“So I sat down and looked at all the word games that people liked and started to do some research into the field to try and understand why it was that my friend really enjoyed this game, while I really didn’t like it.

“Then I also started to think about once I knew what those aspects that people enjoy were, how could I make them enjoyable to me? What are the things I need to adjust to this game to make it appeal to the kind of gamer that I am? As opposed to the type of gamer that he was.”

With Gage’s newest addition to his repertoire Pocket Run Pool being a modern spin on classic, did he also have a similar reaction to it during its beta?

As a keen fan of the sport and an amateur player himself at college, it was an inevitable no.

A personal interest in the game would, however, make it a fitting candidate for Gage’s style of reinvention. Additionally, it also meant that he could rely on his own views on what a good and fresh game of pool should play like.

“I think a lot of pool games are either targeted at people who like the idea of it or people who are really into pool and are deeply and technically invested in it and enjoy a rocket ship level of control,” Gage tells us.

“But none of those were similar to my experience of pool, which was this beautiful and stupid game. Eight-ball is dumb in this great way in that it’s one of the rare bar games where you could be winning and then suddenly lose.

"It’s a very uncommon style of game and it really makes it very charming.”

Eight-ball is dumb in this great way in that it’s one of the rare bar games where you could be winning and then suddenly lose.

Zach Gage’s games typically succeed on their merit of offering accessible and straightforward delights, but the process of creating them is filled with a myriad of design challenges.

One of his main tasks for Pocket Run Pool was to account for a loss of perception of space that real-life players enjoyed. The key, according to Gage, is in the balance. While offering players a concrete indication of where shots will go is a must, too much information would mean the game would lose a sense of challenge.

“That’s a difficult gradient to pull off when you actually have to give people concrete information,” says Gage.

“It’s a big part of why the shot flicking system is designed the way it is. It’s also a big part of the subtle design choices in the game, such as the length of line that is showing you where the ball is going to go.

"Or the fact that when you pull off a bumper shot the line will go infinitely to show you all of the places the ball can go. You can use that line as a rough tool to figure things out.”

The next design issue stemmed from keeping players engaged once they had fine-tuned that set of skills. Pocket Run Pool holds a perfect score that is achievable if a player can sink all the balls in the highest scoring hole without losing lives.

“There is a perfect score and that can become a problem when players are playing something for a long time,” said Gage.

“When you get the score once it can affect your ability to play and enjoy the game because now every time you start if you make the slightest mistake, you’re starting over.

“This is a problem that a lot of games have in terms of leaderboards. There is a common issue that the better you get at a game the longer the game takes and it becomes less enjoyable.”

To offset the problem of chasing high scores in a leaderboard Gage added modes with differing objectives. One pits player against player in an instant tournament mode that adds human error to the mix while another introduces an element of gambling that takes away the power of a perfect score.

The most prominent change to Gage's approach this time around with Pocket Run Pool would be to make it free-to-play to offset an industry-wide problem of developers cloning games.

I think it’s nice for the kind of people I’m going after, people who are not hardcore gamers but actually play a lot of games in their lives, but don’t think of themselves like that.

Gage says that his games tend to be an easy target for cloners as the concepts are complex but the execution is relatively simple. That, coupled with a mobile game's typically small download size and a premium price tag means that cloners can make a quick buck in creating free-to-play variants of premium titles.

“When I released Sage Solitaire a clone of it was released on Android within 24-hours, which is pretty staggering.”

The problem inspired the games developer to switch to a free-to-play model with IAPs as a means to undercut cloners and make sure they couldn’t find a form of an audience by creating a cheaper version of his game with more aggressive ad usage.

Quite happily though, while initially a means to beat the cloners at their own game, Gage’s new model of free-to-play titles would end up making his games more accessible to the audience he was after.

“I think it’s nice for the kind of people I’m going after, people who are not hardcore gamers but actually play a lot of games in their lives, but don’t think of themselves like that,” explained Gage.

“A lot of people don’t have credit cards attached to their phone or aren’t used to spending money on games that people have made. So making games free-to-play is a nice way of getting them involved.”