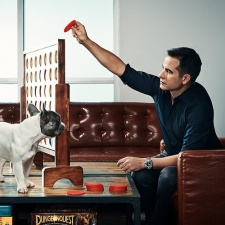 As part of the deal, the Harry Potter: Hogwarts Mystery developer will gain access to Disney and Pixar’s treasure trove of various intellectual properties, from the Lion King to Toy Story.

The first game to come from the partnership is a mobile game based on Disney’s upcoming Frozen sequel.

The developer will also be taking over as publisher for pre-existing title Disney Emoji Blitz, with members of Disney’s Glendale Games Studio joining the company to continue to operate and grow Disney Emoji Blitz, but now as part of the Jam City team.

We caught up with Jam City president Josh Yguado (Pictured, main) to find out more about the deal and what it means for the developers future.

PocketGamer.Biz: How long has this deal with Disney been in the works for?

Josh Yguado: We know Kyle Laughlin (Disney senior VP of games and interactive experiences) and his team well and have been looking for ways to collaborate for quite some time.

We have deep respect for the work they’ve done - amazing games like ‘Where’s My Water’ and ‘Inside Out,’ and their deep understanding of Disney IP.

We can’t wait to bring Disney stories and characters to life on mobile for fans around the world.

Why acquire Disney's Glendale Games Studio and how will it be incorporated into Jam City in the long-term?

It’s a world-class team that has experience building mega-franchises and understands the nuances of iconic IP and how it translates into great games.

The Glendale team’s continued involvement in Disney Emoji Blitz will ensure a seamless transition and be super important as we develop new games like the new Frozen mobile game we announced yesterday.

How involved will Disney be on the projects you undertake with its IP? Do you anticipate it’ll be quite hands-on?

We expect to work closely with Disney.

We have deep respect for the work they’ve done.

Their deep understanding of Disney stories and characters will be critical as we look to create authentic mobile entertainment experiences that Disney fans around the world will truly love.

You’ve previously said that you have plans to be an entertainment company, so where does the licensing strategy, like you have with Disney and Harry Potter, fit into your larger plans to build multimedia franchises?

This fits perfectly into our strategy. We’ve always believed in a balanced portfolio of in-house developed new original IP and licensed third-party IP.

This deal entrusts Jam City with Disney characters and stories that millions of fans around the world already know and love and allows us to create lasting franchises that will be played five, 10 and 20 years from now.

You’ve dabbled with both midcore and casual genres with games, might we see more Harry Potter/ RPG like games with the Disney IP or will you be favouring a more casual approach?

We are not currently disclosing specific details around the partnership game concepts but needless to say, Jam City intends to continue to build an exciting and dynamic portfolio of games in a variety of innovative game genres.

Note: We asked Yguado how long the deal would last for and if Jam City was still considering an IPO, but he declined to comment.