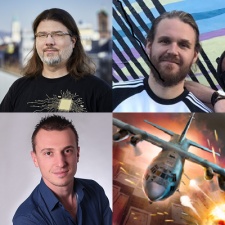 PocketGamer.biz: With Zombie Gunship Survival about to pass its second-year anniversary, how do you reflect on its performance – from launch to the mature title it is now?

Simon Mittruecker: We are incredibly proud of what we achieved with Zombie Gunship Survival. Even two years after the global launch its unique look, gameplay and quality still stand out.

The game racked up millions of downloads within the first month of its launch and ranked among the top 10 apps in more than 100 countries, making it one of the biggest launches of that year.

We are very happy about this growth, especially considering the fact that the project went through very big changes in the last year.

Two years in, the game is still going strong and has even grown in daily active users and revenue over the last six months.

We are very happy about this growth, especially considering the fact that the project went through very big changes in the last year; including the transition from Flaregames as Zombie Gunship Survival’s publisher and co-developer, to being fully responsible for its ongoing development as of late 2018.

Looking at the state of the project today I am very optimistic about the future of the game.

How big is the team currently handling live ops at Flaregames?

Simon Mittruecker: Today the team is a lean, cross-functional group of people, most of whom have experience with both development and publishing.

Particularly when it comes to user acquisition, product management and game design, our team members really work hand in hand with each other to make sure we cater to our players' expectations, without forgetting about the business perspective.

The mobile games market is getting more and more competitive and it is absolutely essential that all disciplines work towards shared goals. So far, this approach is working very well for us.

Since bringing Zombie Gunship Survival’s live operations in-house at Flaregames, we have already shipped a number of maintenance updates, fixing a list of legacy bugs and bringing the game up-to-date – both technically and in terms of live-ops tools.

Currently, we are working on new content and feature releases – things our players have been asking about for a long time.

What steps have you taken to ensure that Zombie Gunship Survival maintains a sizable and active player base all this time after its launch?

Nicolas Nottin: Through our in-game community we’ve seen some incredible engagement: player-run tournaments, all manner of fan-created content including guides, art and fiction, not to mention players simply socialising while using the game as a hub.

We attribute this not only to the quality of the game, but also the committed organising of community members and a precedent for engagement that we set from the project’s outset.

A great example is our Mysterious Messenger ARG, which involved our players in a hunt for clues, requiring them to decipher multiple encrypted messages to find, collect and compile various pieces of information about upcoming content.

It’s no exaggeration to say that our players kept the game alive during its quieter periods and now is the time to acknowledge that incredible support.

This “game within the game” not only generated unique memories within the community hub but also united our players to resolve challenges together, establishing a precedent for a non-toxic and cooperative community.

It’s no exaggeration to say that our players kept the game alive during its quieter periods and now is the time to acknowledge that incredible support by continuing to make Zombie Gunship Survival an even better experience.

With so many zombie games on the market, how do you make Zombie Gunship Survival stand out from the crowd?

Simon Mittruecker: While it’s true that there’s no shortage of zombie-themed games on mobile, the Zombie Gunship franchise has a very original angle.

The original Zombie Gunship, launched by Limbic in the early days of the App Store, laid the groundwork with its combination of undead enemies and authentic military-grade weaponry.

Putting the player in the gunner seat of an AC-130 aircraft gives the game different perspective compared to most games in the zombie and shooter segments. Combined with the monochrome graphics via the gunship’s thermal imaging system, this lends the game a very unique look and feel.

Flaregames recently took sole control over Zombie Gunship Survival from the original developer Limbic. What challenges were faced with this and what was the transition period like?

Simon Mittruecker: When Limbic officially decided to move on and focus on other opportunities in late 2018, it was clear to us at Flaregames that we wanted to continue supporting the game.

This was not a small challenge, as everybody who has ever taken over a large-scale free-to-play game probably knows. At that point in time, Zombie Gunship Survival had not received an update for over a year and almost everybody from the great original team at Flaregames had already moved on.

However, thanks to Limbic’s help and the great work the heroic programmer Martin, we managed to transition the project into the Flaregames infrastructure fairly quickly, allowing us to start the actual work of maintaining and updating the game.

To what do you attribute Zombie Gunship Survival’s longevity and how do you sustain it?

Simon Mittruecker: Considering the long period in which the game received no updates it is clearly the strength of the core gameplay as well as the passionate community that carries the game.

Our goal is to add to this with our work. We create new content and fresh features and events while making sure we are maintaining the magic of the core gameplay. And we are listening closely to our community to make sure we provide the experience they want.

It goes without saying that data analysis plays a big part in this, too. Product management and user acquisition are embedded disciplines within our game team.

They are looking at the game through the data lens and provide the rest of the team with that important perspective. Combining these different inputs and viewpoints makes for good decisions and allows us to run live ops successfully.

This showed that players were getting invested in that community early on in their journey with the game, proved further by the fact that, on average, 45 per cent of players enter the community hub within their first hour of gameplay. By hour 48, that percentage rises to more than 80 per cent.

I think the key learning has been that if we provide the community with the tools to engage and moderate themselves, they will.

We can see that these players contribute significant value, too; 90 per cent of all the game’s total spenders are members of this in-game community.

Considering Zombie Gunship Survival’s payer conversion is seven per cent, which is very high, this is especially impressive. On top of this, 60 to 80 per cent of the game’s monthly in-app purchase revenue comes from players who are registered in the hub.

Finally, how has your experience with Zombie Gunship Survival informed where you are/what you’re working on now?

Todd English: I think the key learning has been that if we provide the community with the tools to engage and moderate themselves, they will.

While this statement is simple at face value, it has some profound implications on game design and how we approach the live operations of a game. When you think about how we, as an industry, have traditionally approached game design It’s historically been as a closed system.