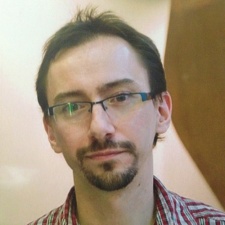 Jorge Rosado is a game designer at Russian developer ZeptoLab.

This time we spoke with ZeptoLab’s game designer Jorge Rosado.

Jorge Rosado: I am one of the game designers at ZeptoLab. In our company, game designers are involved in a wide range of tasks, depending on the development stage of the project. Considering ZeptoLab's motto is “innovation”, I would define our role as sparks of the creative engine.

Cool and innovative concepts can come from anyone inside the studio, not just designers, but we are the ones who grab those ideas, give them shape, gather teammates around and start the development.

Cool and innovative concepts can come from anyone inside the studio, not just designers.

We also do a lot of routine stuff like managing the in-game economy, processing feedback and work closely with analysts and product managers to define the scope of future updates.

I started with designing and coding small games that were published on floppy disks inside the early nineties video games magazines. After that, I and a couple of friends started what could be considered one of the first indie games dev studios in Spain.

We were developing games for PC. After that, I have always worked in different Spanish games studios in the role of a game designer. Five years ago, I decided to move out of my comfort zone and face all the challenges of designing free-to-play games for mobile platforms.

Totally. Ever since I’ve been playing games on my old eight-bit computer, it was crystal clear to me that I wanted to design games for my whole life - no matter what it takes.

That is how I decided to focus my career on video games. It wasn’t an easy path, though. I started way back in the early 90s, when computers weren’t frequent and in a country, Spain, where video games were not perceived as something you can make a living out of. But here I am.

In the early days, we were all self-taught. There were no courses dedicated to games development specifically and getting access to interesting materials on how to make games was really hard.

However, I studied computer engineering in college as a starting point and I still think it was a great decision. I also try to constantly learn from all the people that I have a chance to work with, to expand my expertise.

Thankfully nowadays the games development sphere is very democratic, open and everyone has access to tonnes of info and specialised courses.

My advice is to either self-study or look for games development courses. Whatever works better for you.

Moreover, always try to go to as many games developer events as you can afford and participate in game jams because that’s where you can meet people with the same interests as you and create opportunities to “jump” into this industry.

I really enjoy the very first creative stages of development, when I work on proof of concept by my own or together with a tiny team: throwing in ideas, writing down concepts and making prototypes out of them.

I was naive enough to think that I would become a millionaire and would be able to afford a Ferrari with my very first game.

I guess nowadays the game designer role is well represented in the industry and in the media, so people have a chance to learn what we do and how awesome our job is.

But even so, frankly speaking, our role is still a bit mysterious to quite a lot of people out there who still think games are just code, graphics and music. Even some people in the industry still don’t have a deep understanding of what we really do in all the details.

I was naive enough to think that I would become a millionaire and would be able to afford a Ferrari with my very first game.

Probably, the first lesson most of us have learnt was that making good games is tougher than you think. The second one is this: always keep an eye on the market and make games not for yourself but for your audience.

Start making small games, just to prove to yourself that you can start and finish a game. Use them as a representation of your skills and try at first to get a job in a studio to gain a better understanding of all the processes before going indie - if that is your agenda.

Learn from your failures and persevere until you reach the success, and even then, be humble enough to understand that it will be really hard to release another hit, as keeping the bar high will demand the best of you.

ZeptoLab seeks the next big designer with its Game Designer Challenge