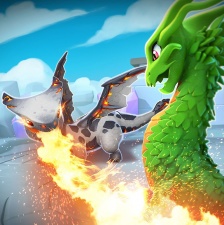 In this entry of our Live and Kicking series, we spoke to Gameloft lead producer and Dragon Mania Legends game manager Botond Szalacsi regarding the five-year anniversary of the fantasy casual title.

PocketGamer.biz: With Dragon Mania Legends now more than five years old, how do you reflect on its performance - from launch to the mature title it is now?

Botond Szalacsi: That's a difficult question to answer, since the ways we have measured its performance has changed over the course of its life. We're proud of its steady and stable growth year-on-year, but more than anything we're proud of the fact that DML is still popular with so many players after so many years.

Customer support is obviously important since a happy player base is a more loyal, dedicated and engaged one.

Mobile gaming is an increasingly saturated market, and to maintain such a steady base of loyal fans who continue to have enthusiasm for the game and who are always hungry for more from us makes us incredibly proud.

But perhaps the best thing we have managed to do is to reinvent the way we approach live ops to ensure that our players are continually able to get new features, events and content, as well as evolve our attitude towards the game's story, which we learnt is a big interest for our players.

How big is the team currently handling live ops on Gameloft?

Specifically, for the live ops side of the development, we have four people working entirely on this part of the game, covering planning, setup and balance.

Customer support is obviously important since a happy player base is a more loyal, dedicated and engaged one. We do have some internal staff at the studio to help deal with escalated cases and can rely on Gameloft's dedicated customer care team to assist.

However, we also find that having a community manager able to interact and assist on a more personal, direct basis means that we're able to handle the concerns and issues that might arise for our more dedicated and vocal players – especially on the forum. This creates a more positive sentiment throughout our community, but also helps to create more personal connections with our most active and long-term fans.

When it comes to updates, we always have the attitude of ensuring every update has some interesting, player-facing content. This means there's always something new and meaningful given to the player when they update, some new feature, dragon or content for them to enjoy on top of just bug fixing.

And since we update the game quite a bit more regularly than many of our competitors, this means there's always something new and fun for our story- and content-hungry players to enjoy on a consistent basis.

What steps have you taken to ensure that Dragon Mania Legends maintains a sizeable and active player base all this time after its launch?

Perhaps the most important thing we have done is to ensure that DML is still very enjoyable for free-to-play players. In this sense, we try to avoid having any restrictions or paywalls to our content or events, and that those who do play for free are still able to work towards their own goals with each new event.

A lot of mobile games include some kind of paywall where it becomes necessary to pay to continue to play, but with DML we ensure that there is no such block and that there’s always something for the free-to-play players to have fun with.

To what do you attribute Dragon Mania Legends' consistently impressive grossing performance, and how do you sustain it?

We absolutely have to entertain our players. So long as there's always something new or interesting for them to take part in or look forward to, then they'll always want to get back into the game to see what else there is to see or do. From our side, we've really learnt how to work with live ops so that we can better plan and more effectively provide things that players actually want to see and enjoy playing.

We started with week-long events, for example, then it became two-weeks and now we have month-long events, and we find that players are particularly engaged when these special mega-events are taking place.

What would you consider Dragon Mania Legends' biggest achievement in its five-year lifespan?

This is quite a tough question, there have been so many achievements over the years. Having been able to build a game that continues to be stable even after so many years is probably our biggest achievement.

But the fact that our month-long mega-events prove to be so appreciated and popular for our players is perhaps a testament to how we have learnt to work with live ops to help maintain that stable player base. But honestly, we didn't have some silver bullet that gave us the answer, it's just been a series of improvements and evolvements that have helped us become more effective at understanding how the game is played and enjoyed.

But on a personal level, for me, the biggest achievement for us as a studio is being able to achieve close to zero crunch. We've made steps to ensure that our staff don't need to put in extra hours each week to get the game made and the consistent and regular updates released, and that's just something I'm very proud of.

We're pretty proud that have over 100 million downloads for the game, but otherwise we don’t have much else to share on this front.

What lessons have you learned/are you still learning from Dragon Mania Legends? Is there anything about the game that, in hindsight, you’d now handle differently?

The truth is that there's always something to learn from, whether from features that have been in the game from the start or something that was introduced in the last update. That's the nature of games like DML that are constantly evolving, especially since new features can sometimes impact older aspects of the game, too.

Some things we can address through updates, others are harder to tackle now that the game has been available for so many years, but it's always something that helps us when we're thinking about the direction of the game, new content and updates in the future. We're always trying to learn from each new update, feature, and even feedback from our very vocal community.

Finally, how has your experience with Dragon Mania Legends informed where you are/what you're working on now?

Well, actually we do have some surprising events planned for the year that will really spice up the game. We're always planning for new mega events since those are in such demand with our player base, and it's important that we continue to keep the high quality of our art, since the fantasy theme and style of the dragons is such an important asset to DML, and is commonly one of the things that our players appreciate the most.

However, this year we plan to shake things up a bit with some of our updates, which will do more than just add in new content but actually bring in changes to some of the core elements of the gameplay. It'll definitely keep things fresh, and is going to be pretty exciting, especially for those of our players that have been playing for the five years of the game's existence.