"360 million downloads across all our games and still counting" 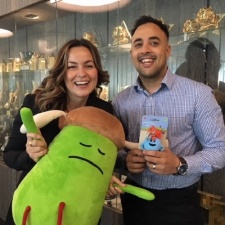 Jasmine Hansen is the head of brand and marketing for Metro Trains Melbourne and also the head of dumb ideas for Dumb Ways to Die.

In this entry of our Live and Kicking series, we spoke to Dumb Ways to Die head of dumb ideas Jasmine Hansen and head of digital ways to die Dean Mendes regarding the seven-year anniversary of the original Dumb Ways to Die game.

PocketGamer.biz: With Dumb Ways to Die now more than seven years old, how do you reflect on its performance - from launch to the mature title it is now?

Hansen: We still reflect on it with absolute disbelief. We knew we had something special from the moment we saw the creative concepts, but couldn't have envisaged how it exploded virally the night it was launched, or how many different versions of the song would be available on YouTube, or that the song would beat out Rhianna's 'Diamonds' song on the iTunes charts.

We never thought we'd end up in games, but it seemed like the logical next step to further extend out the train safety story. Our original title, while still our most popular, was modelled off the song and the gameplay mechanics are very linear.

It's great to see how far we've come with more thought-out gameplay, more progression and storytelling in our games than ever before. Our games are now the core pillar of our brand strategy and the rest of our business is designed to funnel our fans back into our games and keeping them playing for longer.

It's not just a safety message or a game, it's now successful enough for Metro Trains (owners of the brand) to make it a standalone business in its own right – one of the first brand campaigns to be digitally gamified and the only marketing campaign to be commercialised – now that's something to be extremely proud of.

It's not just a safety message or a game, it's now successful enough for Metro Trains to make it a standalone business in its own right

Mendes: At Metro Trains, the day-to-day brand and games are handled by just two people and we work collaboratively with our development partner Playside Studios to complete the monthly live ops for the games. Playside's Dumb Ways team consists of around five people.

Mendes: We are lucky with the Dumb Ways to Die brand that it is so popular and globally recognised. This does a lot of the heavy lifting for us in terms of people being satisfied with the games as well as getting them to download in the first place.

While a lot of large players in this space now rely on UA to drive traffic to their games, we are still heavily reliant on features, and our updates are the cornerstone to our strategy in getting them. On customer service, we are only a small team of two which makes it really hard to respond to every little bit of feedback we receive from our players but we try our best. Definitely an area we could improve on.

What steps have you taken to ensure that Dumb Ways to Die maintains a sizeable and active player base all this time after its launch?

Hansen: We have ensured there is at least one new game in the market each year to keep our fan-based engaged. Social media has also always underpinned our strategy. Seven years ago we used Facebook, Tumblr and YouTube to attract a sizeable and active player base, now we are using channels such as Instagram and TikTok to further drive player numbers and overall awareness.

Recently, TikTok has worked extremely well for us, organically driving 15 million views on our channel, 292,400 followers and 2.1 million likes. As a result, there has been a notable increase for game downloads.
We are just starting to dabble in user acquisition. We now do paid UA into other apps and mobile games. We've been testing for about six months now and will look to scale this up in the future.

To what do you attribute Dumb Ways to Die consistently impressive grossing performance, and how do you sustain it?

Hansen: The art style and characters have been a unique differentiator for us. I also think the macabre humour and naivety to the beans have made Dumb Ways to Die unforgettable. But also, from a parental level, I feel that Dumb Ways to Die has always been a game that parents have been okay with their kids playing because deep down there is an important message to every game or content piece we make: Be safe around trains, or stay safe.

Safety themes run deep with everything we do and this is on display when you're saving our little beans from a bad death in a game or avoiding hazardous obstacles. We've been able to sustain this by being true to who we are and delivering casual games that are just fun to play.

What would you consider Dumb Ways to Die's biggest achievement in its seven-year lifespan?

Mendes: We're most proud of our games and the longevity we’ve had in this space. 360 million downloads across all our games and still counting. It was also a pretty cool feeling having the Dumb Ways to Die song break into the iTunes charts in 28 countries.

TikTok has worked extremely well for us organically driving 15 million views on our channel, 292,400 followers and 2.1 million likes.

Mendes: Two to three million organic downloads a month with daily average user base between 500,000 to 600,000.

What lessons have you learned/are you still learning from Dumb Ways to Die? Is there anything about the game that, in hindsight, you'd now handle differently?

Hansen: I think the landscape of the games industry has changed considerably in the last 18 months. Featuring has changed and there are a lot more players in the space, so it's much more competitive and harder to sustain yourself in the charts and meet business objectives.

We currently build games the way we always have. A kind of philosophy set around 'if we build it they will come'. However, based on our experience, I think we have to do a lot more leg work in the back end to make sure we see continued success.

A lot more time goes into prototyping too, alongside more time being spent in soft-launching, tweaking game designs and watching the data to make sure retention levels are at its optimal before you officially launch. That's how you build a sustainable games business in the future and how you can scale UA profitably.

Finally, how has your experience with Dumb Ways to Die informed where you are/what you're working on now?

Mendes: We're only at a cusp of how big the games industry is going to be and it will only continue to grow. For Dumb Ways to Die, the next step is to work on a strategy that allows us to stand out from the rest of the hypercasual market and build up our character and brand backstory through longer-form content and television series.

We want this to drive deeper engagement with our games and funnel people through to spend more time in the Dumb Ways to Die ecosystem. The brand love for Dumb Ways to Die is prevalent through the six million TikTok views, 340 million views on YouTube, 6.5 billion sessions played and 360 million downloads, so there is no reason we can't set our sights big and aim to be the next Angry Birds?

We've just launched the new title Dumb Ways to Dash. We have another runner style game due out in two months. We're exploring longer-form content pieces and working on a few new game ideas now. Keep watching and keep playing!