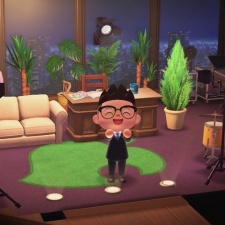 With most of the world locked away under quarantine, many people are quickly looking to new forms of entertainment and finding creative new endeavours to make content. One that has recently taken off across the web has been Animal Talking, a virtual late-night talk show taking place in the world of Animal Crossing: New Horizons.

Hosted and created by Star Wars: Rogue One screenwriter Gary Whitta, Animal Talking takes direct inspiration from the likes of Jay Leno, Conan O'Brien, Stephen Colbert, Between Two Ferns, Wayne's World, and The Larry Sanders Show - the latter of which being the host's all-time favourite television show ever.

Alongside Leah (his wife and executive producer), their seven-year-old daughter, and bandleader Adam Nickerson (an indie developer), the group coordinated five shows within its first week. This then turned into a schedule consisting of Mondays, Wednesdays, and Fridays, featuring celebrity guests, stand-up comedy, and musical performances.

"I cannot tell you what the lightbulb moment was," Whitta tells PocketGamer.biz.

"It wasn't like I was watching a talk show and it clicked. It was really an experiment to see how much can I make it look like a real one, because all you really need is a desk and a couch. But as it turns out, the game has cameras, lights and all the chachkies and paraphernalia that you would need.

"I took the basement of my in-game Animal Crossing house and by just using the furniture, props, and lighting that were available in the game to everybody, we were able to build a pretty amazing and authentic recreation of a real, classic US talk-show set," he continues.

"What really made it pop was this amazing city skyline wallpaper that my wife had."

And pop it did, with Animal Talking blowing up and being selected for the front page of Twitch only a few days after launching. While in prime position, the show generated 12,000 viewers, making it the 14th most-watched channel, and accounting for 50 per cent of all Animal Crossing content on the platform.

"The show is already booked out for the next three weeks," exclaims Whitta.

"I've got real celebrities trying to get on the show. In the same way that Animal Crossing is having a cultural moment right now with everyone locked up at home and people wanting an escape from the misery of their real-lives, Animal Crossing is a whimsical place you can retreat to.

The worst thing that can happen in this world is being stung by a wasp.

"It's very therapeutic," he adds.

"The worst thing that can happen in this world is being stung by a wasp. It's not a game you beat, there's no challenge, you just do what you want! It's like a virtual dollhouse and you just have fun. It's been tremendous for the whole family. It's totally captured the zeitgeist."

Of course, with success comes opportunity, and with that opportunity comes options to monetise. Already approached by potential sponsors, cable television networks, and advertisers who want to get in on the action, Whitta has earned zero money from the show (apart from his cut as a Twitch partner which covers his electricity bill), and has no plans to make any revenue from it going forward.

"I honestly don't care if I ever make a penny out of it," says Whitta.

"That's not the point. We've been approached by sponsors but honestly, I'm not interested.

"I stream on Twitch because it's fun and a way to socially connect to people in our time. We can't really do that in the real world," he continues.

"As soon as this starts to feel like a job or business enterprise, I'm going to lose interest. This started as a fun way to hang out with my friends and cheer people up. That's all I want it to be. As soon as it becomes cynical, monetised, or corporatized, I think the whimsy and authenticity of it will disappear."

Friends of the writer - including Naomi Kyle, Felicia Day and Mary Kish - have all visited the island for interviews but Whitta is still looking to tempt prominent Animal Crossing players, such as Brie Larson, Chrissy Teigen, Elijah Wood, and Danny Trejo to the couch.

"There are two ways to get on this show: you can either be so famous that I would be stupid to say no to you, that it would only be good for the profile of the show, or you are just someone I think is cool and interesting and I want to hang out with my friends," Whitta says.

The show is already booked out for the next three weeks

However, above all else, there’s one particular popular figure from the games industry that tops his wish list.

"If I could wave a magic wand and get anyone on this show it would be Reggie [Fils-aime]," confirms Whitta.

"This is a show that is built in a Nintendo video game. I'm a video game nerd. The majority of people watching are video game nerds, and Reggie is someone that is beloved in that world. I'd love to have him on.

"We've reached out to him via Twitter, so I'm sure he knows the show exists. He's welcome anytime."

Coincidentally, while this interview was taking place, Fils-aime responded to Gary’s request via the social media platform seemingly granting his wish.

Gary, DM me. Would love to learn more. https://t.co/btfVwVAK2q

In the meantime, Animal Talking's schedule continues to grow with plans for the forthcoming weeks already set in motion, but it's unclear what the longevity of the show looks like.

The Tonight Show Starring Johnny Carson aired for 30 seasons between October 1962 and May 1992. Could Animal Talking ever challenge for that title?

"I can't even tell you what's going to happen on Monday's show at this point," explains Whitta.

"I can tell you this: the show will definitely be on the air for the next three weeks at least, as it's booked out."

Whitta adds: "All I know is that right now at this moment is that we're having a lot of fun, and we'll continue to do it as long as we enjoy it and so do the audience."