"People expected all games to be free, and we were sitting on an almost finished 10-plus hour premium console-style adventure game" 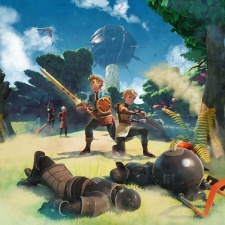 This week, we spoke to Cornfox & Bros. co-founder and creative director Heikki Repo surrounding the studio’s five-year development of Oceanhorn 2: Knights of the Lost Realm and how studio started after the collapse of Universomo.

Heikki Repo: Our company was actually founded by mobile game industry veterans. All of us used to work for a THQ Wireless-owned mobile game studio Universomo in Helsinki. We had a chance to work with big IPs, such as Star Wars and Pixar. Just as the smartphone era was beginning in 2010, the studio was shut down, and that was our chance to realise a lifelong dream of founding our own game studio: Cornfox & Bros.

The goal of our company was to make iPhone games, but our first projects were still related to THQ Wireless. Our first released game was Death Rally in 2011 that was co-developed with Mountain Sheep and published by Remedy Entertainment. The game was fairly successful and we got a chance to start work on our own IP, Oceanhorn.

People expected all games to be free, and we were sitting on an almost finished 10-plus hour premium console-style adventure game.

Oceanhorn: Monster of Uncharted Seas has sold almost two million copies, and it was released on eight different platforms. Oceanhorn 2: Knights of the Lost Realm has now over one million users in Game Center (the real number is actually much higher, but only the Game Center stats are public info).

Oceanhorn: Monster of Uncharted Seas was done by the three founding members of the company. Since then, we have carefully chosen individuals to join our team. Currently, we are made up of seven people, plus our partners working with music and audio. We have a small studio in the heart of Helsinki, 100 meters from the main railway station.

We are very hardworking people – each one of us wears many hats. In many ways, we are an old-fashioned game company. We are passionate about the technology, creativity, and the latest innovations, as well as some old classics. We are less excited about the latest trends in business.

For example, our heart is not in free-top-play. We are lucky to have been around long enough in the business to know that you don't have to jump on every bandwagon. Investor money is easy, making money with your games is hard, but if you love the thing that you do and you take ownership of the risks, it is possible to make successful titles.

Our days at the studio are spent developing features further and building up content. Our latest game, Oceanhorn 2: Knights of the Lost Realm, was a five-year-long project and we are currently still polishing the game and updating it with new content and features.

We have been around for 10 years now, with this spring marking the 10th anniversary of our company, So, we remember the time when there was no 'freemium' and premium apps were the only thing available.

We developed Oceanhorn: Monster of Uncharted Seas for two years and during that time we saw premium app prices decrease heavily. Not long after, all apps were priced at 0.99 cents. We started to become a little concerned about the pricing of our upcoming game but hoped things would change again. People expected all games to be free, and we were sitting on an almost finished 10-plus hour premium console-style adventure game.

Luckily our publisher FDG entertainment had a very forward-thinking view of the situation. Their idea was that since the App Store landscape had changed so radically, we should communicate the premium nature of the game and sell it for $10. It was probably the biggest gamble we have ever taken, but one that truly paid off.

Oceanhorn has now sold over a million copies on Apple App Store alone and the game is a living example of how a healthy premium market still exists.

Our company's partnership with Apple started during the Death Rally days, and with each title, more people within the company knew who we were and what we did and vice versa. We have always valued their technology and services and we as game developers have been a dependable partner for them.

It was a very natural transition for us after a long and fruitful relationship with Apple.

I'm quite traditional about this. I think if people are willing to spend their money on your product and they enjoy the time spent with your game then you can call it a success.

The way we see it is that opportunities for premium titles never really disappeared after the rise of freemium. Still, the markets are so disproportionate in size that it seems like the premium market is non-existent. But there's the thing: our games have been more profitable than many Finnish freemium games.

I see the appeal and temptation of freemium for the studios. Game developers are smart and talented people and many of them look at the success of Supercell or Small Giant Games and think “we are more than qualified to have a horse in this race”.

Back in 2013, when we released the game on iOS we were approached by Nintendo welcoming us to release the game on Wii U.

The overhead costs of supporting a freemium app are so high that if a soft launch is not showing the right numbers - even after tweaking the parameters - people choose to start over rather than release the game.

Could you tell us about Oceanhorn 2: Knights of the Lost Realm?

Oceanhorn 2: Knights of the Lost Realm is the sequel to Oceanhorn: Monster of Uncharted Seas. Chronologically, its events take place many centuries earlier so story-wise it would make a lot of sense to call it a prequel.

When we finished the first Oceanhorn, we decided to raise the bar of what we could achieve with a small team in the follow-up. We moved from our internal engine to Unreal Engine 4 and rebuilt the gameplay from the ground up. First of all, there was a switch from isometric to third-person view, with all that goes along with it – new combat and puzzle possibilities, the verticality of the environments, etcetera.

Most of all, we wanted the player to be immersed in the game world. You can dive in our game, dip in the turquoise waters of the reefs or roam in the bottom of the riverbeds. You can climb up on the highest of peaks in the levels or search for shortcuts by crawling inside the hollowed tree trunks We have a wide variety of different biomes in the game, ranging from green fields to lush jungles, arid deserts and snowy mountains.

The Legend of Zelda is clearly a big inspiration for the game, can you tell us about this?

Yes, Zelda games are a big inspiration for us but let's not forget a long line of other console adventure games and JRPGs, like Chrono Trigger and Dragon Quest. We really want to build our titles from the same essence that these iconic titles are made of.

What was Nintendo's take on Oceanhorn, which eventually led the original to launch on Switch?

Back in 2013, when we released the game on iOS we were approached by Nintendo welcoming us to release the game on Wii U. At that time, we did not have the resources to start the porting work so the game was never released on Wii U.

Years later we were one of the first “Nindies” to follow the Switch launch. Nintendo scheduled indie titles to launch one per week and in June 2017 we had a whole week of spotlight. That visibility really worked out great for us!

We are going to follow the journey through with Oceanhorn 2. Soon, we are going to launch a new update that we call the Golden Edition.

It adds tons of polish and content to the existing game, including a new big dungeon, several mini-bosses, over 100 new voice-overs, and an improved ending for the game, which ties the game better with Oceanhorn: Monster of Uncharted Seas along with hundreds of smaller changes that improve the game.

High-quality games bring great partnerships. We have a long relationship with Apple and since we started to develop Oceanhorn 2 with Unreal Engine 4, we are also partnering with Epic Games. We use their amazing tools every day to make a cutting-edge mobile game – in return, they have one more partner using their tools and providing valuable data and fixes for their engine.

We have gotten a lot of support from Epic, with dev grants as well as amazing opportunities to show our game, like GDC and Nordic Games, for example.